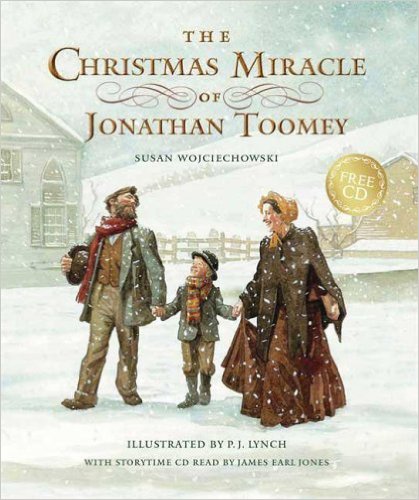 A Season for Hope

The Christmas Miracle of Jonathan Toomey

Okay, here’s an honest take on this season. I am feeling not a bit of the happy holiday ho ho ho this year.

Maybe it’s the state of the world, but then again, the world has always seemed in a state of a huge kerfuffle in some place or another every year.

It just seems that this year, the kerfuffles are more random, more unreasoning and more relentless.

Then..this picture book appeared in the mail. And, I sat with it for what seemed like more than minutes, leafing through the pages and its pictures…. and the portrait of a man.

His name is Jonathan. He’s a woodcarver and that is about all anyone in the small town knows of him – or cares to. He’s called “Mr. Gloomy,” because of his downcast look and gruff manner. Jonathan mumbles, mutters, complains and cavils about the noise of the church bells and the sound of children playing.

Our first instinct is to say, “What a grump,” and let it go at that. But the author doesn’t let it go – or us.

Ms. Wojciechowski, in this 20th Anniversary edition of her picture book which won the Kate Greenaway Medal, gives us a closer look at the mysteries of love and the human heart, and won’t let us look away – like the town.

For she lets the reader know early on the reason why Jonathan Toomey has put a band-like vise around his ability to care or love. And we are the only ones that do.

And it takes a widow, Mrs. McDowell, and her young son, Thomas, and their honest request for help, to release its hold.

They know nothing of his past. They only know and accept the person that they see.

And through their small acts of kindness, without intrusion into his private pain, they find a way in, through his only means of communication that matters to him – his woodcarving.

Requesting a replacement of a lost and carved wooden nativity set, the McDowells ask Mr. Toomey, the “best wood-carver in the whole valley,” to take on the job.

He does, and what follows is the gradual thaw of a solitary human heart, as piece by carved piece, amid their daily quiet visits and proffered small baked goods, Jonathan Toomey re-engages with life – and hope. And so do we.

Rarely have I seen a picture book where word and image meld so masterfully in P.J. Lynch’s paintings, evoking a visceral sense of the struggle it takes for one person to reconnect with life, and the simple ease with which a mother and son understand, and allow someone to be who he is, where he is, and still not click off, as we so often do with “the prickly people,” as I call them.

The tale is unfolded with such

force that we are entirely in its

And for the time I encourage both you and your young reader to spend this Christmas season with “The Miracle of Jonathan Toomey,” you too will be renewed, revived and reawakened to the possibility of hope in a world that needs it as much as the despairing woodcarver. And maybe more.

There a lesson for me in this picture book, and for anyone that cares to listen.

The question is subtly asked of each of us : In the face of life’s unfairness and sometimes unbearable realities, do we break – or do we break open, to create newness in life.

And here’s the rub: often the answer to the question is not solely in our own hands, but in someone else’s – that helps us “carve” out a new way for us to be.

We are the carvers – for each other!