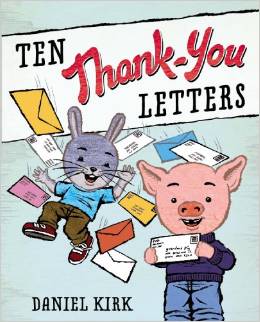 Be Thankful for Friendship!

There are so many approaches to this picture book, I honestly don’t know where to start reviewing them.

First, I thought I’d take the friendship angle of the yin and yang. Hey, it IS the beginning of the Chinese year of the goat. Friends are often not mirror images of one another. But often they do complement each other. After all, we are all not alike in personality and tastes; that’s why we have chocolate and vanilla ice cream!

And, in the case of Rabbit and Pig, I was reminded of the divergent friendship of Wally Cleaver, in TV’s “Leave It To Beaver” and his pal, Eddie Haskell. Does your child have a friend that they fully embrace and you, as a parent, scratch you head and wonder why? Wally’s parents did. But they sagely figured there was something about their super kind and considerate son Wally, that he needed in the “all about me” Eddie.

Here, Pig is bent on writing a series of thank-you notes, only to be constantly interrupted by Rabbit for paper, stamps and who knows what all.

Pig is nothing if not task-based and very methodical in his pursuit of same. Rabbit is, well, shall we say, more of a spontaneous spur of the moment type. Rabbit is constantly prompted by the ideas of Pig, and he too sets his own into motion. There’s one glitch. Rabbit lacks the physical things to put make them happen! Enter his friend Pig. He is only too obliging, kind and willing to provide the needed apparatus of pencil, paper, stamps, and envelopes for Rabbit’s just thought of thank-you notes.

As Rabbit thinks of MORE people to write letters to, Pig’s letter to his grandma is constantly put on hold amid a flurry of interrupts.

Here’s another take on this picture book that is a great angle to bring up for kids. And that is the writing of a thank-you note. Does anyone even do this any more?

I remember at Christmas; first, came the thank-you notes to aunts and uncles that sent us presents, and then, and only then, were we allowed to play with said toys.

Let’s face it, some kids are natural procrastinators. “Later, mom.” or “I promise I’ll do it later.” And sometimes later never arrives. “Ten Thank-You Notes” is a fine vehicle for reminding young readers there are so many people in their lives deserving of thanks. It’s not only provides a fine read, but a teachable moment. Everyone, from Madame President to the crossing guard is worthy, in Rabbit’s book, and on paper, of a thank-you note!

I fully realize Pig and Rabbit are very young, and therefore they have only learned to print letters in their notes. And that is so wonderful in and of itself. They are so neatly written and very well expressed. But, I can’t let this picture book go by without another plug for the teaching of handwriting.

Finally, what if Pig’s grandma writes a reply to Pig in her own handwriting? Might he be unable to read it? Just some food for thought, parents, as the teaching of cursive sinks from view in some schools.

We have letters that family members wrote by hand on the day of our daughters’ christenings. They were put aside until the girls were old enough to read them. The letters were filled with the feelings of family members on that day. They are rare and revert to a time filled with members of our family that are no longer with us. Please don’t deny your young reader the ability to actually read letters like these.

In the meantime, have your young ones read along with Pig and Rabbit as they both model behaviors and a friendship that not only allows for differences, but would make both Martha Stewart and Emily Post proud!