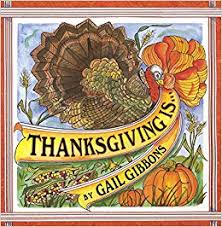 What Does Thanksgiving Mean to Picture Book Readers and Their Families? Here’s a Great Answer!

All across America, come the fourth Thursday in November, families of all configurations will gather to celebrate with rituals of food and family to give thanks. And School Library Journal’s take on Ms. Gibbons picture book is true enough, when it said:

This cornucopia of all things

That is a perfect predictor of what your young reader will find in the pages of Ms. Gibbons Thanksgiving treasure with a be ribboned, plump and fully feathered turkey, gracing the cover of this wonderful Thanksgiving reading treat. It’s a perfect read either before or after the feast, plus a great addition to a story hour or classroom library.

Just how did all this tradition of a harvest holiday start?

Gail Gibbons has provided young readers with a historical and colorful collection of the cavalcade of harvest feasts starting with the Egyptians honoring Min, the god of plants and fertility. Moon cakes were even served as the moon was at its fullest then.

The Greeks had their own Demeter, the goddess of agriculture, while the Romans had their own version in Ceres who was offered the first fruits of the harvest.

Not to be outdone, in the Middle Ages farmers in England held festivals to mark the end of the harvest, as well.

I’m feeling pretty thankful myself right about now now that the harvest from our vineyard/farm is in. Grapes have been picked, apple trees are bare of those red and golden beauties, and the only veggies that remain are the cauliflower, broccoli and the brussels sprouts.

But, what about that American tradition called Thanksgiving Day?

Kids can probably tell you a thing or two themselves about those brave 101 passengers that sailed from England, landing at Plymouth, Massachusetts who called themselves Pilgrims.

Though, as I recall, there were some aboard the Mayflower who were not.

It was a cold and harsh winter where there was a scarcity of food and many died.

Young readers will be fascinated seeing famous Indians such as Massasoit and Squanto teach the Pilgrims how to plant when spring arrived.

I love the detail Gail Gibbons adds in her images as the Indians give the Pilgrims a tutorial in corn planting, plunking a fish in the hole ahead of the corn, as a wide eyed Pilgrim looks on.

The harvest feast that fall was a three-day affair. These Pilgrims and Indians knew how to party.

Her beautifully harvest-hued picture book also points out the differences in dates between the Canadian and American Thanksgiving celebrations. Canadians celebrated theirs on the second Monday of October and, of course, as decreed by Abraham Lincoln in 1863, the American Thanksgiving is on the fourth Thursday in November.

Gail Gibbons has done a wonderful job of putting Thanksgiving into a historical perspective.

Her treatment of an American Thanksgiving is full of the symbols of the celebration; families decorating doorways with corn shocks and pumpkins, pictures of families and friends gathering for the Thanksgiving Feast at a table loaded with many of the same foods the Pilgrims and their guests; the Indians, feasted on.

Nothing is left out in her treatment of all the things that make this American holiday what it is – football games held that day, plays about the Pilgrims put on at schools, and those long awaited floats, balloons and bands of the traditional Thanksgiving Day Parade held in New York City.

The sharing and remembering is a big part of all family traditions, and Gail Gibbons has remembered the best till last in her Thanksgiving picture book for young readers:

Giving thanks for many blessings.

Couldn’t have said it better, Gail!