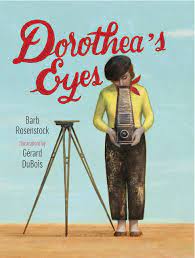 Through the Eye of a Camera, One Can See into the Heart in “Dorothea’s Eyes” by Barb Rosenstock; illustrations by Gerard DuBois

In the cover flap introduction to this wonderful picture book, it says, “From the time she was a little girl, Dorothea Lange saw the world with her eyes and her heart.

Isn’t it amazing that two people with the very same photography equipment can capture a moment in time, never to be repeated, and the lens will see it quite differently with both people? The wonder of that never ceases to amaze me.

From the time she was a young girl:

They are special eyes.

They see what others miss.

Dorothea sees patterns and shapes all around her; in an orange peel, pricks in a walnut sewing table and even the repetition in the row houses  where she grows up in Hoboken, New Jersey.

When Dorothea looks at faces whether its her mother’s “curved cheeks,” her Father’s “angled jaw,” the pursing of  her Grandmother’s lips or the squatness of her baby brother’s nose, she is observing and taking in the human condition through faces.

When Dorothea looks at faces, it’s like she’s hugging the world.

Barb Rosenstock, an award winning author of such books as “The Camping Trip that Changed America,” “Thomas Jefferson Builds a Library,” “The Streak,” Ben Franklin’s Big Splash” and “The Noisy Paint Box” which was awarded a 2015 Caldecott Honor Book designation has written about politicians, artists and athletes.

This narrative, and the art accompanying it by Gerard DuBois, winner of four gold medals from the New York Society of Illustrators, makes me want to delve deeper into the life of this extraordinary photographer and her amazing ability to capture life with a lens.

Her talent went beyond the taking of a picture. Her pictures educated and enriched a nation with their ability to tell a story in a single photo that moved people to action.

Probably her most famous photo is called “Migrant Mother” which depicts in a single photo, taken in 1936  a thirty-two year old pea picker mother with seven children from Nipoma, California in the midst of the Great Depression. Her face is haunting, hungry and so very human that you can’t look away. Two children lean on her for support; their faces turned from the camera. Whom does SHE lean on?

Her ability to capture a common humanity is compelling.

As a result of this heart-wrenching documentary photograph, over 20,000 pounds of food was shipped to the pea farm where the picture was taken!

Dorothea Lange knew “a picture is truly worth a thousand words” and she had the heart to tell stories of cotton pickers, slaves and bread lines where people strove to stay alive in the sweeping Depression that gripped a nation in all walks of life, but most especially the poor and the invisible among us that are voiceless.

Your young reader may identify with her early years where she in almost invisible, yet constantly taking in the scenes around her of parents fighting, the name calling that tags her as “Limpy” because of a bout with polio, leaving her damaged with two different-sized feet and a leg that will leave her in pain for a lifetime.

With all of this, she announces she will learn to be a photographer despite the fact that she has never held a camera! At 18, she wants to show the world what she sees. And with an old camera from a photographer, she learn her craft of lenses and shutters and apertures.

With another photographer she helps build a darkroom from a chicken coop as faces appear on the wet paper in black and white.

Her spirit of discovery and curiosity urges her on to state after state in her long career that finds her doggedly climbing painfully atop cars to document the story and get the perfect shot to tell it.

Dorothea Lange was the first woman awarded the prestigious Guggenheim fellowship and was one of the few photographers that documented the Japanese internment camps of WWII.

Your young reader will be totally absorbed by this life lived outside the lens.

How did she manage to do it?

Here’s a clue  and quote from Dorothea to young would be photographers and readers.

I knew how to keep an expression….that would draw no attention….so no one would look at me….I have used that my whole life in photography…. I can turn it on and off.  If I don’t want anyone to see me I can make the kind of face so eyes go off me…. I  was never obviously there.