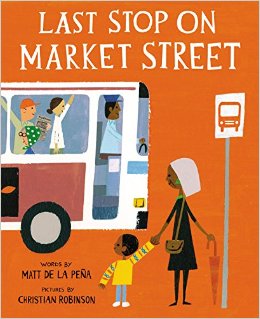 Take the time to enjoy your community

Ah, the old neighborhood! Can you remember yours? Can you remember going “downtown” on a bus and taking in the flavor and fabric of its uniqueness? People and places were part of its specialness, if you were smart enough to take a good look around, and drink it all in with a practiced eye.

And that’s the lovely languor, nostalgia and wisdom filling Matt de la Pena’s “Last Stop on Market Street.” And Christian Robinson’s colorful art makes the people of Market Street come to life in a winning way. His take on CJ reminds me of Ezra Jack Keats’ look at a boy named Peter.

I hope this feeling still exists in towns and cities, for Mr. De la Pena has captured it perfectly in this book; the feeling of “when all you had was time.”

You had time to notice, time to converse, time to visit, time just to “be” in the moment, and whatever it brought. And it sometimes brought a great deal in the supposed ordinary everyday – if you were wise enough to notice. And if you were not, let’s hope that you had someone like CJ’s nana, to teach you the “practiced eye” for observing.

I hope young readers have someone in their young lives like nana, who can jolly them past grumpiness to gratitude for what is – and may never come again.

CJ wonders why they have to ride the bus, why wait in the rain for it, and go to the same place after church? CJ is filled with the eternal “why” of youth, but nana has the wisdom that goes with the “practiced eye.”

She is the one who can point out in the midst of a rainy downpour, that the trees, especially a big one, is “drinking through a straw.” CJ sees, but not really.

His neighborhood, like many, is filled with colorful characters that are unique human beings – if you take the time to listen and learn. And CJ, thank goodness, is on a very special learning curve, facilitated by nana. It’s the learning curve of life, of the real world. And I wanted to give this nana a big hug; for example is always the strongest teacher as she bids each person on the bus a “good afternoon.” And “She made sure CJ did the same.” Great!

Mr. Dennis, the bus driver, is a bit of a magician, pulling coins from behind CJ’s ear, and an old woman on the bus has butterflies in a jar, while a blind man, nana says, can “…watch the world with their ears.”

This is one lucky, lucky young man, though he may only realize it years later. He is getting an education in life.

It is a guitar playing musician that allows CJ to “feel the magic of music.” With eyes closed, (a nearby dog closes his, too), and in a magical moment, CJ is lifted beyond the space of his seat, to a place where he starts to “see” the people around him.

It is this richness of the unique in the everyday, that his nana patiently coaxes him into seeing.

Listen to this quote from nana that I long to have resonate with readers everywhere, for it is filled with hope for many people, “Sometimes when you’re surrounded by dirt, CJ, you’re a better witness for what is beautiful.”

What a great model Matt de la Pena must have had, to bear witness, in the final scene in a soup kitchen, to what is possible, if you teach children to “see” beyond a “selfie” and the tip of their nose!