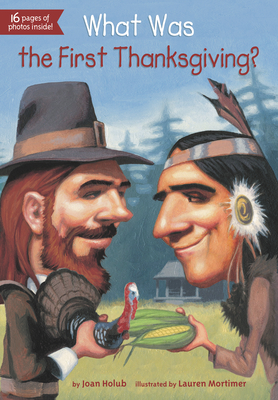 What was the First Thanksgiving?

Which of these facts are true?

There were no forks at the feast, only spoons and knives.

No one ate cranberry sauce or pumpkin.

Well, the answer is all of the above!

If your young reader has graduated to a chapter book and you are looking for a book that gives you ten chapters of interesting fact-filled pages concerning the First Thanksgiving, then this book is a great place to start! Additionally, there are 16 pages of photos and pictures that show you what Miles Standish and Governor Bradford looked like, how an original Pilgrim home was decorated, a picture of a cabinet brought over on The Mayflower, an actual transcription of the Mayflower Compact and a nineteenth century engraving of the Pilgrims landing at Plymouth Rock in 1623! A Timeline is included that spans the 1607 founding of the first English colony in North America in Jamestown in 1607 to the beginning in New York of the first annual Macy’s Thanksgiving Day Parade begun in 1924.

From chapters titled  “Sailing to America” to “Thanksgiving Today”, “What Was the First Thanksgiving” provides a front seat at the founding of the feast held on the last Thursday in November. Young readers will enjoy reading or even being read to from this book in snippets that can last through the Thanksgiving prep time and even take in while munching on leftovers of stuffing, cranberry and turkey. Hey, I didn’t know that Abraham Lincoln was one president that issued the proclamation in 1863 designating a national day of thanksgiving as a tradition on the fourth Thursday in November. Thanks Abe!

And what a great idea those Pilgrims had: let the guests bring the main dish!

In case this particular “What Was” book fascinates your young reader, there are others in this very worthwhile series and they are:

What Was the Battle of Gettysburg?

What Was the Boston Tea Party?

What Was the Gold Rush?

What Was Pearl Harbor?

But take it from me, “What Was the First Thanksgiving?” is a perfect “first” for Turkey Day!