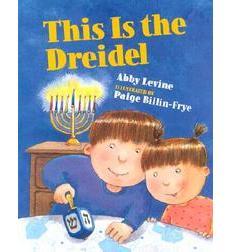 Hanukkah Is Around the Corner!

This is the Dreidel

As I mentioned earlier, this is the first time since the year 1888 that the holidays of Thanksgiving and Hanukkah will dovetail and then not again, by some calculations for 77, 798 years down the road! That indeed is a once in a lifetime opportunity of convergence for two holidays; one as has been noted in a newspaper article, the blending of two holidays: the quintessentially American and the quintessentially Jewish. This is a time to celebrate times two!

So, I am picking picture books for The Snuggery that spotlight both!

Ms. Levine has put together a colorful, rhyming primer for the youngest of readers on the features of history, foods and family aspects of Hanukkah.

Young readers, I’m sure have heard the oral telling and tradition from parents and grandparents of the miracle of the oil that burned miraculously for eight nights and the faith and fortitude of the Maccabees. But, if you need an additional word and picture review for young readers of what occurred and is remembered down the centuries by the Jewish people on Hanukkah, “This is the Dreidel” may be the perfect place to start.

Young Max retrieves his dreidel or spinning top from the drawer where he placed it the previous year. A game is played with a top called a dreidel. On the four sides are marked the symbols for the words, “Gimmel”, “Hey”, “Shin” and “Nun”. Children put nuts, raisins or Hanukkah gelt (Yiddish word for money that can be real coins or foil wrapped chocolate) into the “pot” before spinning the top. The words mean: take the whole pot, take half the pot, put something into the pot or “Nun”, where the player gets nothing. Needless to say, no one wants to see that word stop. But the game had a much more serious history. Under the rule of King Antiochus, the Jews had to study and pray in secret and if soldiers discovered them, the spinning dreidel was used as a game to disguise what was really happening. Smart!

Many of the symbols of Hanukkah are mentioned such as the menorah, gelt, pushke and delicious, traditional foods shared with family such as latkes. Some people are perhaps fixing them mixed with pumpkin or sweet potato this year to mark the synergy of Thanksgiving and Hanukkah! It’s called in some circles, “Thanksgivukkah”.

My favorite picture in the book is the generations of Max’s family gathered around the piano to sing, “O Hanukkah” to mark the special night:

“These are the songs we sing to declare

That once “a great miracle happened there”

In addition to the miracle of this great celebration is the wonder of families gathering to pass on traditions and to share a faith. “This is a Dreidel” is a great way for the youngest of readers to begin to hear the story of the miracle that began centuries ago and continues to be remembered in millions of homes come November 28.