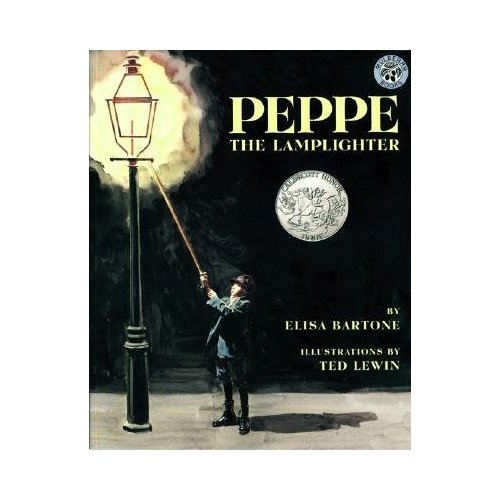 Dedicated to her father’s memory AND the pursuit of the “American Dream”, Elisa Bartone’s Caldecott Honor Book provides a favorite theme of mine for the picture book – showing a window back into the immigrant American experience in all its variations which slips further and further from our own view and certainly, if not for books such as Ms. Bartone’s, from the sight line of our children. As someone once said to me, “We stand on the shoulders of those who came before us.” It is because of their dreams, their vision and their bravery that we, in 2011, enjoy the lives we do. In many cases initially, theirs were stories of poverty, deprivation and struggle, but for the most part, bound firmly with the bonds of family love. In essence, they fell or rose together with our children as living legacies of these stories, so they need be told to have a continuing reality for our children.

Beautifully told and illustrated richly with paintings of color, depth and detail, Ms. Bartone’s book relates the story of young Peppe who probably has thousands of brothers in tone and telling among many ethnic groups having the common experience of leaving the comfort and known quantity of a homeland to seek a better life for their families in America.

Residing in a tenement building painted with wonderful detail on the Mulberry Street of the New York City of the early 1900’s, Peppe’s father, an immigrant from Naples, Italy is ill and unable to work. The young Peppe has big shoes to fill as the breadwinner of seven sisters and two parents! Peppe multiple inquiries for a position among the various shopkeepers are fruitless and he is desperate. Finally, his tenacity is rewarded when he is offered a temporary job to aid his friend, Domenico  – that of lamplighter!

Kids will marvel at this pre Thomas Alva Edison world where electricity does not exist and outdoor evening lighting is provided by a lamplighter whose task, to Peppe at least, borders on the magical.

Each evening at twilight Peppe took the long stick

of the lamplighter and passed through the street.

He reached high for the first streetlamp, poked

open the glass, and set the lamp aflame. Then one by

one he lit them all – and each one Peppe imagined to

a small flame of promise for the future.

With each sputter of light, Peppe makes a wish, each in their turn, for all of the people he loves and for the particular need he feels they have.

But Peppe’s father is less than pleased with this new job as he angrily declares, “Did I come to America for my son to light the streetlamps?” and yells from a window dire predictions, “You’ll belong to the streets!” The first night Peppe acquiesces to his father’s demand to quit,

a sudden turn of events comes upon the family with the disappearance of the youngest, Assunta, as Peppe’s father frantically calls, “Dov’ e mia bambina?”

Will Assunta be found in the unlit streets of Little Italy or will Peppe find a way to light her way home?

This immigrant story of family love and light is one worth hearing and telling to a new generation of young listeners. Bellisimo, Peppe!