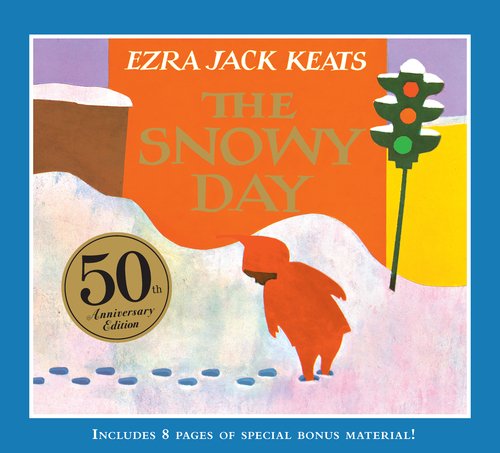 Way Back Wednesday Classic: The Snowfall Continues for 50 Years!

This past October 29th we had a freakish snowfall, so it’s not a far stretch to imagine little Peter of Ezra Jack Keats, The Snowy Day awakening with a feeling of wonder and surprise at that gift of a fresh white coating on the ground and the special day ahead of him, even though it sort of put a damper, (no pun intended) on Halloween.

The feeling of this book reminds me of another Peter – the actor Peter Billingsley in Jean Shepard’s Christmas perennial movie favorite, The Christmas Story. The scene I am referring to takes place very early Christmas morning. Young Ralphie, as played by Peter Billingsley, awakens and as his bed is near the window, immediately leans on the sill and beholds an amazing sight in the world of childhood. It has snowed overnight and the glistening sight of the trees in his otherwise drab backyard, takes on the appearance of a fairyland! It is a magical cinematic moment captured and seen through the eyes of a child and that feeling resonates with millions of viewers who eagerly watch it on its 24-hour marathon showing on Christmas Eve. This is a mirror image of the opening page of Keats’ The Snowy Day! Both Peters are in awe of nature’s ability to transform in the blink of an eye.

Such moments and the feelings they evoke, are sometimes very difficult things to capture in their immediacy, but here, in The Snowy Day and in the territory of the picture book is where this book and the picture book in general, continue to shine.

2012 is the 50th Anniversary of The Snowy Day that won the Caldecott Medal in 1963 and in celebration of the event, Viking Press has issued an edition with special bonus material included.

Young Peter’s red snowsuit with its pointed cap is still easily identifiable with his journey through a day after a snowfall is evocative of childhood itself. Toe pointed tracks in the snow, brown stick poking at snow covered trees, snow ball fights, making snow angels with wide wings by falling backward into the snow, sliding down a snow mountain and the innocence of putting a snowball in his pocket to save for tomorrow are common childhood experiences which continue to evoke recognition and pleasure.

My favorite page is Peter seated on a stool at the end of his day, relating his adventures to mom as she pulls off his soggy socks. This is such a familiar event to both parent and child that it is still so fresh in my mind as I remember performing this same ritual over many successive winters with my girls.

Of the bonus material included at the end of the book is the actual July 15, 1963 Newbery Caldecott Awards dinner program at which Mr. Keats was honored for The Snowy Day. I was touched as these additional pages relate how terrified Mr. Keats became at the thought of his acceptance speech the evening of the banquet for the awarding of the Caldecott. Though extremely fearful, he spoke about how his friends calmed him down before his delivery and then, during the speech, he spoke of how his friends helped him come up with the story of Peter:

Friends would enthusiastically discuss the things

they did as children in the snow, others would suggest

nuances of plot, or a change of a word here or there.

All of us wanted so much to see little Peter march

through these pages, experiencing, in the purity

and innocence of childhood, the joy of a first snow.

Ezra Jack Keats who passed away in 1983 succeeded in defining for generations of readers in this iconic picture book, not merely the wonder and beauty encompassed in the span of a day filled with a first snowfall, but the still rarer beauty of this increasingly compressed and shortened period of time – childhood.

Have a copy of The Snowy Day on hand to share with a child on the first day where snowflakes magically transform the landscape and together form snow angels, poke showers of the white stuff off trees, live the beauty of this book and with it, create a memory!  Along with the written word, these are the things that last folks! Do it!