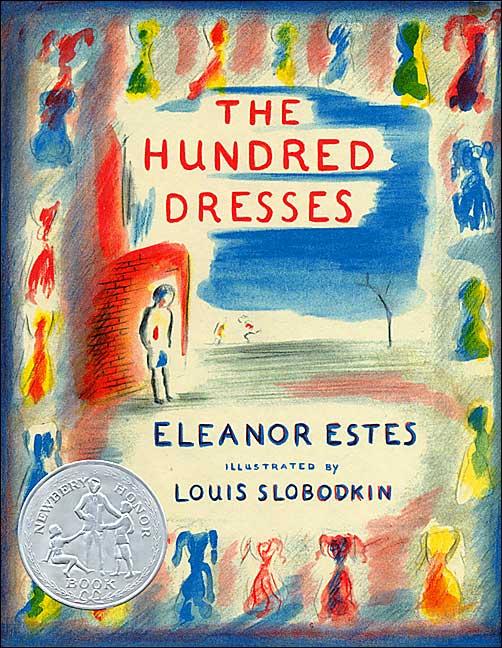 Pricks of conscience can be powerful motivators for children to “do the right thing” as they mull over past deeds where perhaps they either didn’t do anything wrong themselves, but allowed a wrong to happen without speaking up. The story of the little Polish girl, Wanda Petronski, who wears the same faded blue dress to school each day, yet claims to her bemused and mocking classmates that she has 100 dresses hanging in her closet is a classic gem. It is a portrait of an isolated soul who leans at recess against a brick wall alone as no one will play with her. But Wanda’s story struck a cord not only with Eleanor Estes who witnessed the events, and apparently felt badly about it, but also every child who’ve either been in Wanda’s shoes and leaned against a brick wall alone or been one of those who watched her!

In Eleanor Estes Newbery Honor Book, The Hundred Dresses, the pangs of conscience were strong enough to foster the writing of this award-winning book that has spoken clearly to generations of young readers from 1945 to 2012. That’s quite a span of 60 plus years! Maybe it’s true that though the outer child may change over time in clothing, habit and faddish behaviors, certain inner emotions and feelings do not. For example, in The Hundred Dresses, the character of Wanda Petronski deals with the problem of what was then labeled “teasing” which could involve name- calling as well as excluding or ignoring someone. Today, it might be called “bullying” depending on how prolonged it is, how intense, and what it involves. Social media such as My Space, YouTube and Facebook are also unfortunately in the mix of  “cyber bullying” today.

When Helena Estes asked her mother why she wrote The Hundred Dresses, Eleanor related the story of the town in West New Haven, Connecticut where the author grew up, of the girl in her class with the Polish name who wore the same dress to school each day. Both the Polish name and the same dress worn each day because it was the only one she owned made her stand out.  And moving away in the middle of the school year, as her classmate did, deprived Eleanor of the opportunity to say she was sorry. This classic book flowed from that single event. It was Eleanor Estes’ apology!

I love the one hundred beautiful pictures of the imaginary dresses Wanda leaves with her teacher that the instructor hangs on the walls of the classroom after Wanda’s family leaves town.

They and she are unique, lovely and artistic. Her classmates can only rue what they never gave a chance to be appreciated. The closest thing to an apology is a letter Peggy and Maddie compose informing Wanda she has won the artist’s medal! Kids will marvel at Wanda’s ability to forgive as she, via a letter to the teacher, offers two of the beautiful dresses she’s drawn and graced with the faces of  the two classmates who ignored her; Maddie being the initiator and Peggy lacking the courage to intervene.

Louis Slobodkin’s soft, pastel drawings are intermixed with those in a faded black and white along with his renderings of the faces of the children so as to make them identifiable with almost any child. It sort of promotes a feeling that the reader could relate to Wanda, Peggy or even Maddie.

While the reader’s heart may ache for the unfairness of Wanda’s treatment by her peers, they will cheer her refusal to be defined by her last name or the lack of variety of her school clothing and admire her charity towards her tormentors as she uses her artistic talent to show them her forgiveness.

And so to all the Wandas of the world who, for generations have stood alone, leaning against against schoolyard walls, whether the last name is Petronski, O’Hanlon, Hirsch or Ramirez, be be proud of who and what you are – uniquely you!