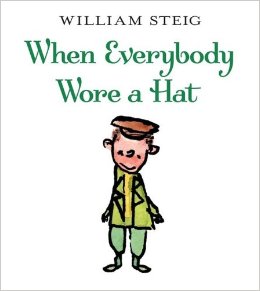 When Everybody Wore a Hat

I confess I had never heard of this title by one of my favorite picture book authors. William Steig, former illustrator for the “New Yorker” who did not start his picture book career till he was in his sixties, is a sure reminder for all those second career, “Chapter two” people dreaming out there, that it is never too late to dream. What is that saying? ”There is one book in EVERYONE.

And Bill Steig had a slew of them in him from his Caldecott medal winning, “Sylvester and the Magic Pebble” to “The Amazing Bone”, also a Caldecott Honor book, and from “Amos and Boris” to “Dr. De Soto”, and “Abel’s Island”, BOTH Newbery Honor books. Quite a haul for someone that wrote such stories of imaginative adventure and characters of cunning, ingenuity, daring, along with a knowing acceptance of life. Coupled with wonderful vocabulary using words such as phosphorescent and odoriferous to describe the sea with the first word and a villain with the second, and it’s easy to see why young readers still love his books. Ever hear of a kindly ogre named Shrek? That’s Bill Steig’s book too!

I love books that connect generations. Kids want to know what life was like in mom and dad’s day, and better still, gram and pop pop’s day! And here, Bill Steig serves it up to this generation from HIS generation, in the story of when he was a boy, .”…almost a hundred years ago, when fire engines were pulled by horses, boys did not play with girls, kids went to libraries for books, there was no TV, you could see a movie for a nickel and everybody wore a hat,” as he tells it.

Bill gives a clear, but vividly cartoonish take in art and a wonderfully descriptive feel for his parents from the Old Country. I chuckled at his depiction of a typical mom/pop quarrel in which they spoke one of the four languages they spoke; German, Polish, Yiddish and English. Thankfully, the kids didn’t quite know what caused the ruckus, but the radiator also came in for a bit of dad’s ire for letting off steam as well.

Caruso and the opera were favorites of his parents, as they listened to a phonograph you wound up with a crank. Hey, I have one of those too, and the sound is great! Chess also was a favorite game played with a neighbor named Mr. Hoffman.

Hats were worn – sometimes with fruit on it – by ladies. Hey, I even remember wearing hats to church on Sunday! If you watch old news footage of baseball games in the 40’s and 50’s, EVERYBODY is mostly wearing a hat, even on a weekday! You’re right, Bill!

And, boy were things inexpensive as Bill points out. For instance, young readers will be agog at the fact that a hot dog could be bought for a NICKEL, as well as a pound of fruit and a seat at a movie.

They’ll also marvel at the number of times Bill moved and he was impressed at how strong those movers hauling huge pieces of furniture down flights of stairs were. Bill Steig lets us meet lots of interesting people that came in and out of his life when he was eight years old. Here are but a few worth meeting; foibles and all: Esther Haberman had a big mouth, a beefy butcher named Barney, Prince the janitor’s dog that scared the local kids, the elegant Mrs. Kingman who was just passing through the neighborhood with her pooch, and kindly Dr. Wager who actually came to the HOUSE! Yup, doctors made house calls then. I may be dating myself, but our family, too, had a fine man named Dr. Modrys that visited us when my youngest brother had the measles. It really wasn’t very unusual then.

Bill Steig’s trip down the memory lane of his young life is worth the reading journey for your young reader. It’s a fine peek into a window in time that has closed. Then, boys like Bill had haircuts in barber chairs and listened to stories filtering through the air at Ditchick’s Barbershop. And sitting on a horse like a real cowboy and having your picture taken was a treat.

All of these simple pleasures and interesting characters fed Bill’s very active artistic imagination with lots of material for his books. All the drawings in this book will make you feel as if you have taken a stroll through Bill’s neighborhood with him and know these people too.

But his closing lines are very telling. He says he wanted to be either a seaman or an artist. He DID become the artist, but you can’t tell me he hasn’t sailed to some pretty interesting places aboard those books he wrote!

And the best part of it all is that WE get to go along for the ride in all of them. Thanks for the ride, Bill! We get to see the past through your eyes and art. A time it was and what a time it was.