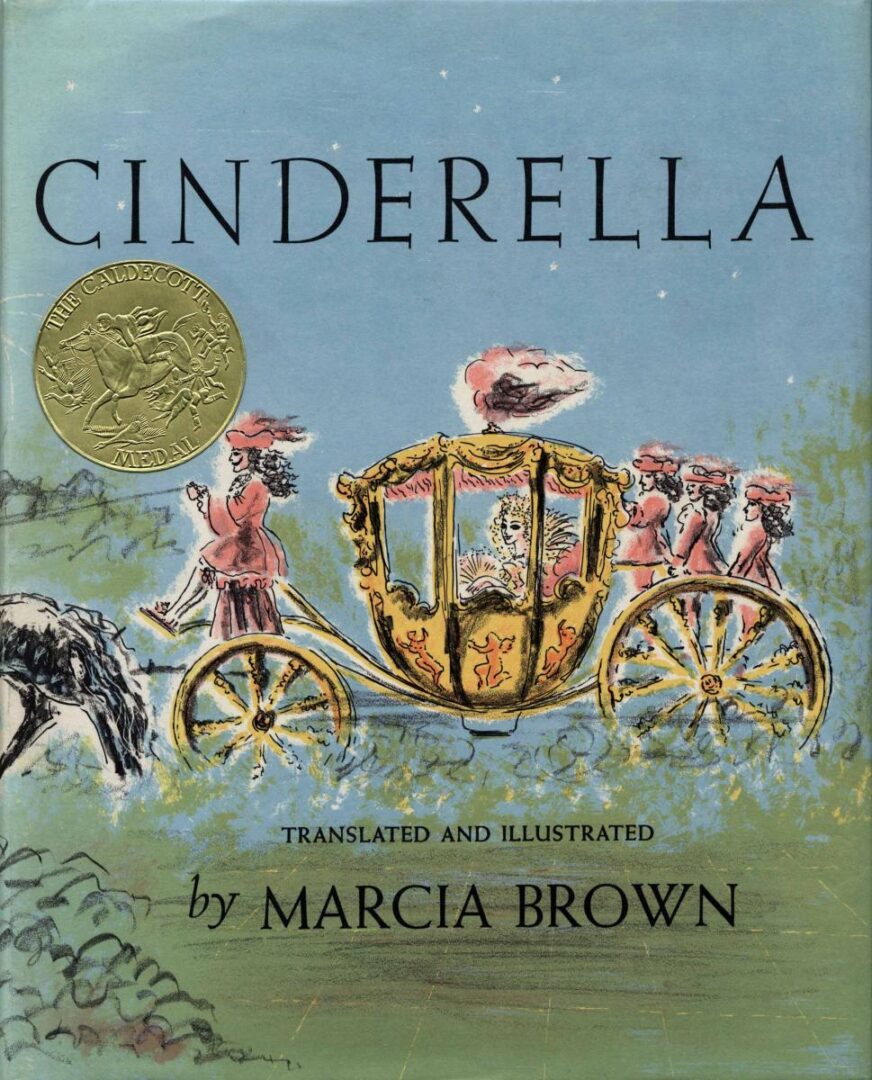 Cinderella or The Little Glass Slipper

Translated and illustrated by Marcia Brown

Picture book author Tomie de Paola tweaked my memory bank recently with his art-mail on the birthday of Charles Perrault.

Many of you may know the contributions of this author and member of the Academie Francaise. He basically set the stage for the modern telling of fairy tales taken from his retelling of folk tales.

Perhaps the most famous would be “Cendrillon” or Cinderella.

Even the Grimm Brothers got into the act, retelling his tales some 200 years after Charles Perrault lived and wrote.

Remember, too, that the famous Broadway creative team of Rogers and Hammerstein got into the Cinderella act with a musical version in 1957 of this transformative tale based on Perrault’s Cendrillon ou la Petite Pantoufle de verre. Starring Julie Andrews, and seen on TV, it was seen by millions of viewers. Wonder what Monsieur Perrault would have thought of that? And since then, there have been several more recent TV versions in 1963 and 1997.

Perrault’s legacy to the picture book genre, and even derivatively to movies, is huge.

Please share with your children that, perhaps in their innocence, they truly believe that Walt Disney conceived the idea of Cinderella. Monsieur Perrault, were he here, would beg to differ!

Mais non! Please set them straight as you sit and enjoy this wonderful picture book, precipitated by Charles Perrault’s tales.

Which is a convenient circle back to this 1955 Caldecott Award winning picture book classic by Marcia Brown entitled, what else, Cinderella. Her book is a free translation from the French of Charles Perrault’s story of a girl literally confined, at times, to the cinders of a fireplace.

Ms. Brown’s translation misses none of the essentials of this gentleman’s daughter whose second wife is, shall we say, less than generous to our heroine? The new wife’s own two daughters inherit her sour and bitter disposition as well. But Cinderella is goodness itself:

The husband had a young daughter

of his own, but she was sweet and

good. She took after her mother,

who had been the best in the world.

Alas, as the fairy tale goes, things are not roses and daffodils in this particular blended family! Not one to complain of her treatment to her papa at the hands of her new family members, I wonder that he must have been absent most of the time or near-sighted not to have seen his daughter’s ill treatment! Thank heavens we have many blended families and step moms in particular today, in sharp contradiction to this one:

She gave her the vilest household

tasks; it was Cinderella who scoured

the pots and scrubbed the stairs,

Cinderella who polished the bed

chamber of madame and also those

And yes, all the glorious transformations are here in softly tinted pastel drawings that make it all the more dreamlike.

A moonlike pumpkin morphs into “a gilded coach of pure gold.” Meandering mice are transformed by Cinderella’s godmother, who just happened to be a fairy as well. In a twinkling they are changed into “dappled greys.” Rats are reimagined into coachmen and lizards are dragooned in a trice, into footmen.

And what might this tale be without a description of the famous ball gown:

Her fairy godmother had scarcely

touched Cinderella with her wand

when her rags changed into a gown

of gold and silver, embroidered with

With the midnight admonition in her ears, Cinderella is off to the royal ball. And her future life awaits…. with a few bumpy turns in the road before a royal wedding ensues.

But, here’s the loveliest part, to my mind, of Marcia Brown’s classic picture book tale.

Cinderella forgives her stepsisters for their treatment of her, and even, get this, gives them a home in her palace!

And, what is even more generous, on the same day that Cinderella marries the prince, she finds her stepsisters husbands!

And they are married on the same day as Cinderella, to “two great lords of the court.”

Now that is a true princess worthy of emulation, not for mere physical beauty, but for her generosity of spirit and forgiving nature.

Cinderella’s sense of noblesse oblige is off the charts.

And as the New Yorker stated in its review:

The pages sparkle with Marcia

Please allow the magic of Marcia Brown’s Charles Perrault translation of Cinderella, to weave its magic with your young reader.

It will be a vivid literary reminder of what the transformative melding of both outer and inner beauty in a person can do.

Through this Caldecott winner, it allows  young readers to see a huge change wrought first by magic in one life, but beyond that, in the lives of others. And those changes are not brought about by magic, but solely by the simple humanity of Cinderella, and her treatment of those step sisters, lucky enough to be in her sphere of influence. Beautiful!

And, to my mind, that is the real magic of this classic picture book read. It is one not to be missed.