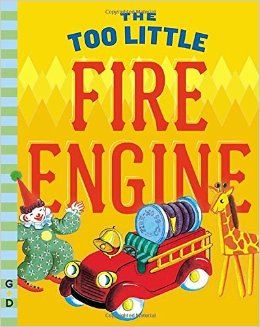 The Too Little Fire Engine

Story and pictures by Jane Flory

I wanted to shine The Snuggery picture book light once more on one of these timeless and beautifully written and illustrated picture books featured in something called the G and D Vintage Series.

This line was originally published in the 40’s, 50’s and 60’s under the Wonder Book line. They were affordable, highly readable for kids, and allowed such famed young writers as Jean Fritz, that would later become household names in the world of picture books, to get their storytelling starts.

And, I highly recommend them, as parents and grandparents will remember them fondly from their own childhoods, and surely enjoy sharing them with their grandchildren, and other young ones they  may know, in want of a good read.

Jane Flory’s “The Too Little Fire Engine”, I have to admit, is a bit of a nostalgic read for me, personally. My dad was Fire Chief for decades at a huge facility called the Brooklyn Army Terminal, and before that, as Assistant Fire Chief at Fort Dix, New Jersey.

Both fire trucks, and the important work of firefighters, were a part of my growing up years, so I have a definite soft spot for this “too little fire engine.”

But it answers a question that goes well beyond the desire of a little fire engine that wants to go to a fire and play with the “big boys;” those fire trucks and firefighters that do the real heavy lifting when it comes to firefighting.

And that is…can someone small do something important? Can anyone contribute in their own small way to a problem that may arise? Can they be a small, but important part of a greater whole, and feel good just where they are, and who they are?

The answer is yes they can. And the “too little fire engine” gets to find out through trial and error, that he indeed can contribute in small ways outside of his usual environment.. the toy shop.

There he is pooh-poohed by the other toy tenants, as he voices his dreams of bigger things, and, of course, not taken very seriously.

Yet, he is taken seriously by the professional firefighters that he meets, when he makes the decision to attend the “next big fire,” as he hears the fire siren blow. These men do not demean nor dismiss him.

And, as for the big engines, that travel to fires first and fast, they’re quick to see that they have a “‘new helper” that scoots about busily putting out small flames and little fires that crop up on the street.

And he is rewarded with a congratulatory, “Good work, little fellow.”

In fact he’s actually invited to relocate to the real firehouse by the professional firefighters:

“Why don’t you come along to

the firehouse with us, little engine?

And, as he returns to the toy shop for a final farewell to his friends, guess what he discovers? Yup! A fire is in progress and guess who comes to the rescue, putting out the small conflagration in a wastebasket, just as everyone else panics.

Will he stay or will he go? It’s the question the “too little fire engine must answer”…. for himself.

Young readers will identify with this “too little fire engine that could,” plus parents and grandparents will have fun rediscovering Jane Flory’s timeless picture book page from their own childhoods, with her brightly bold art with punch, depicting two very different worlds; that of the racing, red fire engines, and a more silent and sedentary collection of toys that live in a shop. Both are rendered wonderfully for young readers, with a simple, yet ultimately savvy narrative, as well.

They may just find themselves eager to share these G and D Vintage titles with new generations of readers.

Classics, after all, do stand the test of time.

And, “The Too Little Fire Engine” happens to be a story with a great lesson as well, for today’s young readers to hear.

And that is, you don’t have to be big to contribute something important and it’s never too young to start dreaming of something you want to do in life.

Come to think of it, that was true of my dad as well, for his dream of being an expert in fire prevention started in his youth; just like that of “The Too Little Fire Engine.”   Dreams can come true…with persistence and patience.

It’s a great picture book image to leave with young readers who are on the learning curve called “life.”