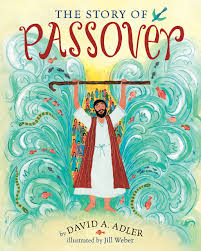 Amid This Year of the Pandemic, Families of the Jewish Faith Will Gather, Celebrate and Endure as They Remember the Origins of Passover.

The Story Of Passover

By David A. Adler; illustrated by Jill Weber

It seems strange that the echoes of the origins of Passover are more tellingly resonating in the year of the world’s 2020 pandemic.

And yet, its centuries old story renews itself in the telling each year and within the homes of the people that gather around seder tables this evening.

Did you know that the name of Passover is taken from the tenth plague that was visited on the homes of the Egyptians?

The Angel of Death passed over the homes of the Hebrews, as they were instructed to smear the blood of a lamb on their doors, in order to be spared.

Passover, usually falling in late March or April, and this year on the evening of April 8th, marks the eight day observance of age-old rituals, occurring in words repeated from the scripting of the seder meal that can be found in the Haggadah.

The Haggadah contains the text that is recited at the seder table on the first two nights of Passover, and includes a narrative of the Exodus from Egypt of the Jewish people.

At the rear of David Adler’s picture book, “The Story of Passover,” is a page entitled, “Seder.” Did you know the literal meaning of the word “seder” is “order.”

It’s a recounting of the symbols that abound on the seder table, including vegetables and salt for dipping, the moror or “bitter herbs, charoset; a mixture of apple, nut, spices and wine as a reminder of the clay the Hebrews molded as slaves in Egypt, the roasted lamb of the Passover sacrifice, plus the roasted egg, representing the Children of Israel, plus the matzoh, a flat bread baked in a hurry as they fled in an exodus from slavery to freedom.

And, prominently featured on the seder table is Elijah’s cup, filled with wine to indicate the hope that this Old Testament prophet  will return, and with him, the promise of the coming Messiah.

If you are looking for a picture book to introduce your young reader to the specifics of a descriptive and detailed story of the Exodus and the Passover that preceded it some thousands of years ago, then David Adler’s, The Story of Passover is a wonderful read.

Jill Weber’s drawings of the plight of the Hebrews, brought to a head by the confrontation between Moses and Pharaoh is depicted colorfully, covering the ten plagues visited on Egypt with such an intensity of feeling, that young readers will be glued to the page, as each successive suffering of boils, hailstones, locusts, and  more, descends on the stiff-necked leader of the Egyptians and his people.

The Pharaoh is force to relent…but not quite!

The denouement of Moses lifting his staff to part the Red Sea, providing the Hebrews an escape route to freedom as they are backed to the sea, is shown by Ms. Weber as a swirl of aqua waters, teeming with fish…and a miraculous way through it all.

The back cover quote is a fitting summary of David Adler’s Passover picture book’s engaging and educational story of the lead up to, and story of, the Hebrew Exodus:

The Children of Israel know the bitterness

of slavery and the salty tears of heartbreak.

But one day they will know great joy

This is the story of Passover, and of Moses,

the man who led his people to freedom.

May this Passover be for all of us, a passing over from the suffering and the longed for deliverance from this pandemic, to a celebration of a new life for all of the peoples of the world, and a freedom from fear that springs from a renewed sense of optimism of what is possible…with faith.