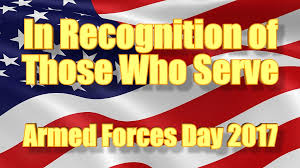 On May 20, 2017 We Celebrated Armed Forces Day with Its Theme : Courageous. Steadfast. Protectors.

May 20 is Armed Forces Day, the time set aside to honor all those who serve America’s military personnel.

“On Armed Forces Day, we salute the bravery of those who defend our Nation’s peace and security,” the president said. “Their service defends for Americans the freedom that all people deserve.”

The theme for this year’s Armed Forces Day is “Courageous. Steadfast. Protectors.”

Armed Forces Day is celebrated each year on the third Saturday in May. It traces its roots to Aug. 31, 1949, when Secretary of Defense Louis Johnson announced the creation of Armed Forces Day to replace separate holidays for the Army, Navy, Marine Corps and Air Force. The day was first celebrated on May 20, 1950.

Here are some of the best quotes, remembrances and inspiration honoring America’s military personnel:

“Freedom does not come without a price. We may sometimes take for granted the many liberties we enjoy in America, but they have all been earned through the ultimate sacrifice paid by so many of the members of our armed forces.” – – Charlie Dent

“You know, 1 percent of us is in the armed forces, protecting the other 99, and they’re all volunteers.” – – Benjamin Walker

“How important it is for us to recognize and celebrate our heroes and she-roes!” – – Maya Angelou

“Armed Forces Day, above all, honors the dedicated individuals who wear the uniforms of their country. Each serviceman, wherever he may be, whatever his task, contributes directly and importantly to the defense of the nation. The task of each one is the task of all the Armed Forces: to protect the freedoms which underlie the greatness of America.” – – General Earle G. Wheeler

“Our armed forces will fight for peace in Iraq, a peace built on more secure foundations than are found today in the Middle East. Even more important, they will fight for two human conditions of even greater value than peace: liberty and justice.” – – John McCain

“We must never forget why we have, and why we need our military. Our armed forces exist solely to ensure our nation is safe, so that each and every one of us can sleep soundly at night, knowing we have ‘guardians at the gate.’ – – Allen West

“Word to the Nation: Guard zealously your right to serve in the Armed Forces, for without them, there will be no other rights to guard.” – – President John F. Kennedy

“History has taught us over and over again that freedom is not free. When push comes to shove, the ultimate protectors of freedom and liberty are the brave men and women in our armed forces. Throughout our history, they’ve answered the call in bravery and sacrifice.” – – Tim Pawlenty