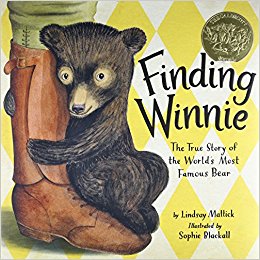 What Happens If A.A. Milne’s Christopher Robin Lost His Way As An Adult? Could Pooh and His Pals Help Him Find His Way Back To What is Essential?

Finding Winnie: The True Story of the World’s Most Famous Bear

It’s a timeless, essential children’s classic read, and I encourage parents to dust off their own copies, get them at the library or buy them at a brick and mortar book store.

Did you know that the real stuffed animals owned by Christopher Robin Milne, the son of A.A. Milne, can be viewed at the Main Branch of the New York Public Library in New York?

I have seen them up close and they are worth the trip if you happen to be in the New York City area any time this summer. They are well worn from being loved so well. And the clusters of children’s faces pressing in on the encased, but fully viewable characters, is a sight of pure wonder.

Christopher Robin will fill movie screens to introduce a new generation of young readers to A.A. Milne, otherwise known as Alan Alexander Milne and his iconic characters from his two books, Winnie-the-Pooh and The House at Pooh Corner.

And they would be Christopher Robin, of course, as an adult, plus the lovable and unchanging Pooh, Piglet, Tigger, Eeyore, Owl, Kanga, Roo, and Rabbit,  that for generations have shown young readers the way to the 100 Acre Wood, with its mirror images of childhood, imaginative play and what it is to just BE…before learning, school and adult responsibilities ensue.

It’s a time to learn and understand again, what is truly lasting…the love of one for another, and the extraordinary in the ordinary of everyday.

But, in the movie, what if, as an adult, Christopher Robin, forgets all the life lessons that he learned early on in the movie?

What if he forgets to remember all he learned at the side of Pooh and his coterie of pals?

What if, in his desire to achieve and act responsibly, he loses his inner child’s voice…or forgets it entirely?

There IS a way back, and on August 3rd, children will surely know the way to the movie, Christopher Robin, plus adult viewers can find their way back home to the 100 Acre Wood; even if they’ve strayed far from its lessons.

But before then, have your young reader try THIS picture book on for size, as the backstory to how Pooh came to be.

Bedtime stories and bears, and voila, you have a terrifically true picture book, allowing young readers to follow a linking line of lineage, through this device, to find the “bear facts” surrounding that beloved bruin, Winnie-the-Pooh.

Sorry, it was just too obvious a perfect pun to resist.

The opening of the book is a common enough setting of a mom and her son at bedtime, with the son, named Cole, asking for a true bear story.

And, it seems, his mom does indeed have a story that is very much defined by these words to her son:

“Sometimes, I said, “you have to let one story end, so the next can begin.”

Her initial story begins with Winnipeg Canadian vet, Harry Colebourn’s stop at a White River train station. He spies a man, possibly a trapper, with a bear cub, and on pure impulse, even though the vet is eventually slated to take care of horses at the World War I front, he buys the bear for a monumental $20, a tidy sum in 1914, and names it Winnie.

This is a love match from the start. Man and bear bond, for this is no ordinary bear. But one that can sail with a convoy of “36,000 men and about 7,500 horses…and about one bear named Winnie,” across the Atlantic from Canada to London, is one bear that can prove his mettle.

Winnie becomes a sort of bear-in-training mascot, hitching along with the vet, and the troops on Salisbury Plain, to remind them of home.

But, eventually, man and bear part at the London Zoo, as the man gets orders to move up to the front, forcing him into a decision regarding what’s best for a bear.

And another story starts.

Guess who spies Winnie at the zoo and is taken with this bear’s antics and falls in love with him as well?

It’s a boy in search of a name for his own beloved stuffed bear at home. And this boy is named Christopher Robin Milne and is accompanied to his London Zoo forays, by his father Alan Alexander Milne.

Visiting Winnie at the London Zoo, sparks A. A. Milne enchanting his son initially, and then millions of readers later, with stories of a bear named Winnie and his woodland adventures.

Think this picture book is done yet? You’d be wrong if you said yes!

The story has to come full circle, and it does, with the storytelling mom revealing to her son that he is named Cole by no mere accident of choice.

Your young reader will love discovering just who Cole is named after.

Brooklyn based Australian illustrator, Sophie Blackall, has done a series of softly straightforward renderings that brings this terrifically true tale to life.

Ms. Blackall is a multiple award winning illustrator with over 20 books to her credit, including “Big Red Lollipop” that was included in the “New York Times Top Ten Picture Books 2010.”

Lindsay Mattick’s delightfully true story ends with a completion of the circular series of stories with both she, and her son, Cole’s  family tree connection to Winnie’s owner from Winnipeg, revealed.

With an addendum of album photos that complete the story, young readers get to see the actual photos of the picture book participants.

Young readers can pore over pictures of  vet, Harry Colebourn and his Winnie, and A.A. Milne and his son with Winnie at the London Zoo. A shot of Lindsay and baby Cole make the story complete. There is even a shot of the original 1914 diary that Harry Colebourn kept, with the August 24, 1914 fateful and fantastic day marked, when man and bear crossed paths at a train station, and a $20 purchase was made to our everlasting delight.

They, and you, will see a photo of the original “Animal Record Card” from the London Zoo, marking Winnie’s being gifted as a bear-in-residence, on December 9, 1914.

And this picture book is truly a gift in itself to any young reader.

One of my favorite lines from the book are Harry Colebourn’s parting words to Winnie as he leaves the young cub at its new home at the London Zoo.

There is something you must always

remember. It’s the most important

always love you.” You’ll always be my Bear.

Delete the word “Bear” and insert “child”, and that’s a very good memory line for every child to have from someone that cares for them; be they bruin or babe.

And, via Lindsay Mattick and Sophie Blackall, we have the picture book to prove it!

And, to top it all, this “unbearably” true story won the Caldecott Award in 2016!

Listen to Kenny Loggins sing  “Back to the Days of Christopher Robin,” … and try not to cry!