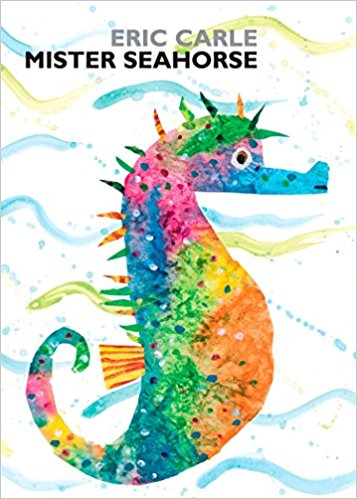 You and Your Young Reader Will Get Along Swimmingly with Eric Carle’s “Mister Seahorse” This Summer!

Perhaps this book by the renowned children’s picture book author, Eric Carle, should have been lumped in with my Father’s Day recommended reads as its subject matter is of fish-filled fatherly devotion. No matter. This iconic children’s author can stand firmly on his own fins er feet.

He’s a past winner of the prestigious Laura Ingalls Wilder Award for his significant contribution to children’s literature. And, oh by the way, did you know that amazing award has unfortunately been renamed by the ALSC in June of 2018, with the safer, in their eyes, Children’s Literature Legacy Award?

Eric Carle won the award in 2003. Originally given every three years, as of 2016, it is given on an annual basis.

If I may very briefly digress from this review, that unfortunate occurrence of political correctness run amok in kid lit was addressed by me in two previous blogs that appeared recently if you care to know how I feel about that miscarriage of literary misapplication of the “core values” of the ALSC.

In “Mister Seahorse,” a fact based, fun observation of several fish fathers caring for their young, Mr. Carle, an inveterate observer of nature, dovetails animal behaviors with their human counterparts in order to share knowledge and tell a grand story.

Even in Mr. Carle’s underwater world, his paternal marine community species of tilapia, kurtus, (also called nursery fish; take note moms, the MALE carries the eggs on hooks attached to their foreheads – who knew?) stickleback, bullhead, pipe and seahorses each have a shared and unique take on what it is to be a father and instinctively protect their young from predators. Sound familiar?

We humans have not cornered the market on the protective instinct. These fish fathers are vigilant and hands on until their young are quite ready to be on their own! Mr. Carle is a keen observer of the analogy of behaviors common to both species, marine and human and the comparison will not be lost on his readers. His collage illustrations in sea foamy colors of green, blue, gold, orange, pink and brown are akin to looking down at the floor of a glass-bottomed boat! It’s dreamy and mesmerizing.

Moms and dads, your own eagle-eyed young observers may not fail to miss, hidden in plastic camouflaged overlays, the scary undersea creatures passing by, scarcely noticed by Mr. Carle’s baby sea creatures.

The marine dads do, and that in and of itself will provide assurance to children that a dad, be he human or marine, is ever watchful of the safety of their young.

Mr. Carle consistently ventures into the world of nature providing little known, yet well researched facts in a completely disarming way certain to entertain and inform his legions of devoted fans. Pick up a copy of “Mister Seahorse” this summer and see what’s doing beneath the waves.

The story will not only hold both you and your child in its undersea thrall, but will confirm the protective instinct was not invented by man, but is encoded in the DNA of many species. Think of the sea dads the next time you’re out snorkeling with the family this summer. Say hi and introduce the family. Just keep a respectful distance if you please.

And speaking of Eric Carle, if you’re interested in taking a pleasant side trip this summer to the Amherst, Massachusetts area, please consider a visit to The Eric Carle Museum of Picture Book Art. There you will find programs and events, workshops and classes, all in celebration of the uniqueness of the children’s picture book and those who, in narrative and illustration, contribute to the wonder and richness of children’s literature.

I encourage you to visit their web site at www.carlemuseum.org