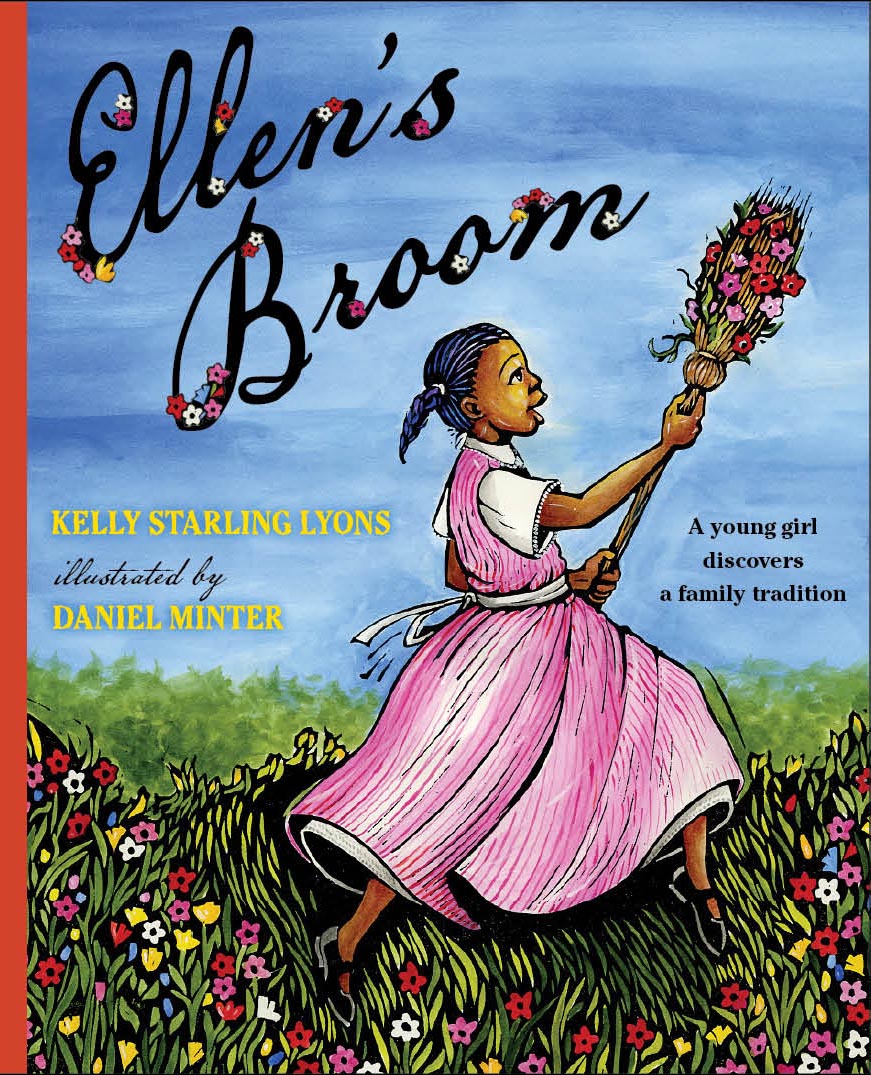 African American History Month Is Upon Us!

Meet Ellen, a young black girl living in the uncertain Reconstruction Days in the South as the Civil War slowly draws to a slow and agonizing close for slave families. Changes are on the horizon for her family and the country as a whole. They are FREE! No more worshiping at the back of the church or meeting stealthily in the woods for prayer meetings.

At church, their Deacon makes a grand announcement – “All former slaves living as husband and wife shall be registered and seen as married in the eyes of the law.”

Ms. Lyons lets us see the meaning of this startling revelation through the eyes of a young girl. Ellen understands a small inkling of what the preacher’s words mean for her family, but she knows it is something momentous as her mother’s eyes fill with tears. For kids, family is at the center of their universe, then and now.

At home, her parents gravitate to the broom hanging on the wall. Ellen’s parents remind their children the broom is a “witness to the way things were”. And the “way things were” was that the most slaves were allowed as a traditional civil wedding, was something called a “broom wedding.” Ellen learns the unjust, but in a way, beautiful tradition of her parent’s wedding. With the Deacon uttering a few words, the broom is placed on the ground and the couple grasped hands and literally leapt over and into their new lives.

Ms. Lyons wonderfully conveys the firm conviction surrounding the ceremony as Ellen’s parents share their most personal feelings with her.

“We were married in our hearts and in God’s eyes,” Mama said.

but we had no way to show it. That’s all changed now. We can be

What a simple thing we take for granted; the simple union of a man and woman that binds them together and all of the hopes and dreams that flow from that all important ceremony witnessed by a community. As the dignity of that transforming “two into one”, ceremony is removed from the black culture, it was hoped, along with its removal, would be the binding force of family. But thank goodness we humans can find a way to circumvent what passes as legal, but definitely is not just, and so it was with the broom wedding.

Young readers may become aware of the way narrative can be highlighted by art with Daniel Minter’s brightly vivid illustrations interrupted by sepia toned drawings that he deftly infuses when the story provides flashbacks of slave days. Their effect is the cruel separation of families in the belief that this would destroy families and hope in a future in the process.

But Ms. Lyons’ picture book is able to richly relate the resilience of the human spirit and its ability to function amid cruelty and the strong urge to continue to carry on the institution of marriage without formal documents of approval.

The day the broom comes down from the wall it now provides a triumphal flower decked banner leading the way to the Freedmen’s Bureau and a legal document of marriage listing her parents’ names and the names of their children.

The final jumping of the broom that Ellen begs her parents to recreate is correctly in the past as her father firmly states. But as in all histories, it is also an important part of who we are. We stand on the shoulders and the events of those who came before us.

That final flickering firelight shining from on the red and pink flowers intertwined in the broom and the marriage certificate proudly tacked next to us is a perfect blending of a past and a future.   The broom is a proud symbol and every bit as significant as the legal document next to it.

It need not bow, but proudly stands as testament and fulfillment of the other.

If you want to give your young readers a window into the sometimes, dry facts of Reconstruction history, try Ellen’s Broom. How momentous events shape human lives is always a good place to start in helping history come alive for young ones.

February is African American History Month and Ellen’s Broom is a great place to give younger readers a peek into the past of this tumultuous chapter in American history.