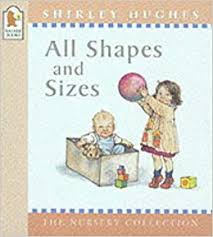 “All Shapes and Sizes” by Shirley Hughes

Lately, I find the need, even in the middle of a summer day, to put a comfy sweater on to make me feel, well, comfortable.

And I have been waiting to put on Shirley Hughes and her picture book contributions far too long at The Snuggery. Her books and their essence are comfort, ease, hominess and slowing the pace of life to a point where, like kids, you can enjoy the moments of life that slip by unnoticed, if you’re not careful.

Shirley Hughes may be Britain’s most famous and favorite illustrator who has been awarded in years past, the designation of a lifetime achievement award for her 270 plus books.

Children may no longer have, as is pictured in Ms. Hughes’s books, an unruffled and sunny meander down the path of childhood. But perhaps paging through her picture books will reawaken your own memories of that distant innocent time. And, just maybe, it may awaken in your own children, the possibilities of what imaginative play and slowing the pace of life can do. And they may just see themselves.

Much of what I gleaned of Shirley Hughes, aside from her books, was taken from a wonderful article by Judith Woods and her interview with Ms. Hughes that appeared in 2015 in “The Telegraph.” Ms. Woods says, “Every one of us is the narrator of our own life. The bucket and spade summers may not have been entirely sunny, the ice-cream not quite so delicious. But Shirley Hughes’s books, with their deftly sketched figures and everyday adventures, uphold a greater, more magical truth about the sequestered world of childhood.”

It’s a decidedly British take on childhood, but its charm is so captivating that it is relatable territory to all children.

“With pen and paint, Hughes sentimentally summons the puppy fat of babyhood and the awkward stringiness of adolescent girls. Her life-drawn images are as vivid and timeless as childhood itself; the rounded cheek, the wayward hair, the shyness and boldness, the delicious terror and laugh-aloud joy of being young.”

Interviewed for Judith Woods’ article in in her West London townhouse, Shirley Hughes has lived there for the past 50 plus years. Now 92 years young, I had to laugh when she said, she watches children in the local communal park to notice their body language, how they sit at different ages and how they run “like a flock of starlings.”

And as for technology and mobile phones, she has this to say: “Bloody phones! They are a terrible distraction; children love them and I understand why because they are instant and whizzy. Books on the other hand, need – deserve – space and time. If parents want their children to care about books they should take them away on a reading retreat every so often; a remote Scottish cottage without television or internet.”

Now I realize this is impractical for the average family, BUT, there are ways to tamp down tech time and boost reading time such as a Family Friday where reading to and with each other around a campfire of S’mores, etc. could manage a similar outcome if repeated often enough with regularity. Children love traditions and something to look forward to with anticipation and predictability is something children love.

I admire this quote by Shirley Hughes: “It’s my job with a picture book to slow children down, make them pore over drawings and recognize their world. Even before they read, they are learning to be readers and make connections.”

In “All Shapes and Sizes”, that’s is just what Ms. Hughes does. “I show them doing what to us are ordinary things but to them are new and sometimes worrying experiences. In my newest Alphie book, he gets locked in the house with the keys, while his mother is outside and there’s a bit of a panic, but eventually he comes up with a solution all by himself.”

“Being an illustrator is like being an actor, you are called on to play a role in a production and if the part -the story – is good then you perform better.”

Her art was originally thought to be too quintessentially British to attract a larger audience of young readers.

Those publishers were sure proved to be off the mark. In 1977, came “Dogger,” the story of a little boy who loses his stuffed dog and can’t abide bedtime without him.

It was translated into thirteen languages and was an international success!

I love this quote from Ms. Hughes: “I’m not anti-technology; it’s great for reading books on the Tube. But picture books can’t be replicated on a screen. Children need to hold them and look at them and feel them.”

“If books are going to survive at all, it is children’s books that will be the last bastion.”

Please don’t let the summer go by without letting your young readers discover Shirley Hughes and her captivating view of childhood.

They, and you, may be bolstering the bastion of the picture book as the gateway to the chapter book – and everything beyond.

And, they will be proving the picture book’s worth as a contribution towards slowing down the frenetic pace for children’s lives, that, pre-pandemic, was the new normal.

And here’s a heads up for young readers; “Dogger’s Christmas” will be released by Penguin, October of 2020!

Somehow this great song by Cat Stevens seems to fit this book: