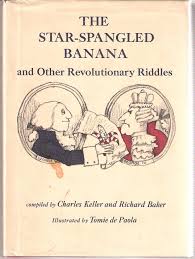 “The Star-Spangled Banner and Other Revolutionary Riddles,” compiled by Charles Keller and Richard Baker; illustrated by Tomie dePaola

If you read blog posts from Liz’s Book Snuggery, you will note that I have been ferreting out picture books that were unknown to me, either illustrated or both written AND illustrated by Tomie dePaola.

This particular book of riddles based on Revolutionary War themes was written and illustrated in 1974; and probably it was looking ahead to 1976 to the 200 year Anniversary of the Revolution of 1776.

Seems that we are, as a culture and a nation still going through some revolutionary times here in 2021. In fact, there has been mention made, I have read, a while back, of changing the national anthem from the much heralded ” The Star-Spangled Banner,” penned by Francis Scott Key, to the song, “Imagine,” penned by one Beatle named John Lennon.

Now I have nothing against John Lennon or “Imagine.” In fact, it’s quite a beautiful tune. BUT, I think King George III would be clicking his heels if he knew that a British born subject’s song was being considered as a change up for the American written “The Star-Spangled Banner!”

But hold on, Nellie, here it gets even more confounding; the lyrics of “The Star-Spangled Banner” come from a poem written by lawyer, Francis Scott Key, called “Defence of Fort M’Henry.” Key was watching from the Baltimore Harbor as Fort McHenry was being shelled by the British in the War of 1812.

He saw the flag above Fort McHenry with fifteen stars and an equal number of stripes flying above the fort.

But the TUNE that the lyrics are set to were taken from a popular British song of the day, written by John Stafford Smith, called “”To Anacreon in Heaven.” And it’s the devil to sing with four stanzas and NINETEEN semi tones.

On March 3, 1931, it was adopted by resolution of Congress as the official national anthem.

Back to the picture book at hand to lighten the feel of all this back story.

Charles Keller and Richard Baker have compiled a grouping of some fifty riddles with delightfully funny, and even dare I invent and use the word, “punny” takes on the subject. “From Columbus to Jefferson, come folklore riddles that throw a humorous light on America’s infant years.”

Tomie does a grand job of doing each riddle justice with pen and ink drawings that evidence verve and vivacity – and lots of humor that young readers will love.

They may even moan at some of them.

Riddle: Where did the first corn come from?

Answer: The stalk brought it.

Riddle: Why was the Stamp Act repealed after just one year?

Answer: The colonists licked it.

Riddle: Why was Paul Revere just like a penny?

Answer: He was the one sent.

Okay…maybe just a tad hokey, but trust me folks, young readers will be trying to Stamp er Stump each other with the Q and A of ‘The Star-Spangled Banner and Other Revolutionary Riddles.’

Here is a beautiful version of “The Star-Spangled Banner” for you to listen to with young readers.