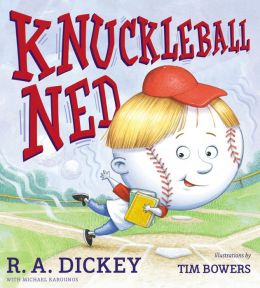 By R. A. Dickey with Michael Karounos; illustrated by Tim Bowers

Ah, hear the crack of the bat, fielders sliding to catch fly balls to avoid errors and precise pitchers throwing in a series of multiple configurations of style are all bent on confounding opposition batters for a new season of baseball.  And the games can be viewed on TV or live, while played on lush green fields from now until October.

And what better day to revel in baseball than Babe Ruth Day which is April 27th.

If you have a young one who is a Little Leaguer or just revels in the all American game of baseball, R. A. Dickey, the starting pitcher for the Toronto Blue Jays and the first “knuckleball pitcher” to win the famous and coveted Cy Young Award has put his picture book squarely in the strike zone.

Meet Dickey’s “Knuckleball Ned” on his first day of school, uncertain as to where he fits in. He doesn’t want to “strike out” with his classmate, that’s for sure! But just where and how can Ned fit in? He is unlike anyone else with his “wiggling wobbling ways” that are unlike anyone else and is dubbed “Knucklehead Ned” Awww.

He wants to belong, but darn it, he’s quite unlike Sammy the Softball, Connie Curveball, or Fiona and Fletcher Fastball or any of his other friends.

His mom’s advice to “Just be yourself” is difficult at the same time that the local bullies, aptly called the “Foul Ball Gang”, begin making life difficult for Ned. They make fun of his every move and mom’s advice is getting pretty hard to remember. Mom DOES know best. Trust me, Ned!

How can he get in the strike zone and silence this laughing, backslapping bunch?

When Connie Curveball’s shoes wind up wound around a tree branch, can the prowess and talents of the others come to the rescue? Nope! But Ned’s non-spinning ball can and does. AND it teaches the Foul Ball Gang who he is AND just what he does best.

I loved meeting the teacher named Miss Pitch, natch, who opens up classroom discussion on what each ballplayer in her class does in his or her spare time. Just that part of the picture book alone was a primer on pitching change up styles and all done in a way highly relatable to small kids.

Babe Ruth, whose day we celebrate today, started out with a great many deficits in the early ledger of his life. Raised in an orphanage after being taken out of a troubled home,  George Herman Ruth, Jr. fell under the watchful eye of a Brother Matthias who introduced him to baseball.

Jack Dunn, the owner of the Baltimore Orioles, somehow noticed the young man’s talents and adopted him at nineteen where he took on the nickname “Babe” as Ruth was a minor at the time.

Ruth played for the Boston Red Sox, and The New York Yankees, where his days of glory as a hitter earned him the nickname, The Sultan of Swat.”

All of this emerged because of yes, sheer talent, but also the will of determination that Babe Ruth possessed.

“You just can’t beat the person who never gives up.”

“Every strike brings me closer to a the next home run.”

“Never let the fear of striking out get in your way.”

“Baseball was, is, and always will be, the best game in the world.”

And the great message that Mr. Dickey also wisely imparts in this readable baseball picture book is the advice he imparts to his own four children in the dedication to Knuckleball Ned:

“May you always celebrate what makes you unique.”

So, as the umps say, “Play ball!” – with Knuckleball Ned…. and remember Babe Ruth on his day!