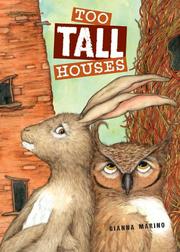 A Cautionary Fable of Friendship

Welcome to a beautifully written fable of friendship gone awry, of one-upmanship carried to extremes in an effort to prove who is in control, and of ultimate resolution of a contest decided by an ill wind that in the end, does blow some good. Whew!

If you’ve been fortunate to have read Gianna Marino’s lovely book about separation, called Meet Me at the Moon, you know you are in for a treat here, and if not, your children are in for a double treat if you read both.

Ms. Marino has the total package in her picture books; the ability to realize a fine narrative and pictures she is talented enough to illustrate herself. Her cautionary fable of friendship between Rabbit and Owl seems to be of two sailing on a sea of smooth glass, with houses less than a stone’s throw apart. Good friends and neighbors, with Rabbit, a rabid gardener, and Owl, a keen viewer of vistas of the forest nearby. What could go wrong, you say? Plenty!

Rabbit’s garden is growing as all gardens must and it is infringing on Owl’s view. Seems a simple solution from Owl’s perch; just build up and over the house of Herr hare. Fine, right? Wrong. Owl’s house now blocks the sun from Rabbit’s garden whose vegetables he depends on for food. And the race is on for taller, higher, loftier accommodations for these two former friends, with one determined to out build the other. The fever pitch of construction intensifies and the pictures of the frenzied former friends will have your young readers giggling at the silliness of the twosome. WHERE WILL IT END? Hint: What goes up must come down, to the detriment of both.

Young readers will have a fine page turning time watching the construction antics of these two and may quickly come to realize it does take two people er, animals, to have an argument. What they may also arrive at, via this delightful tale, may be the realization that there are two sides to every story and the truth lies somewhere in the middle and that, as a very wise friend once said, in dealing with conflicts and friends, – “Would you rather be right or would you rather have the friendship”? Kinda makes you stop and think. And that is exactly what Ms. Marino’s fanciful fable delightfully demonstrates with these two denizens of the deep woods in Too Tall Houses. Togetherness is much better than being right and alone. ‘Nuff said.