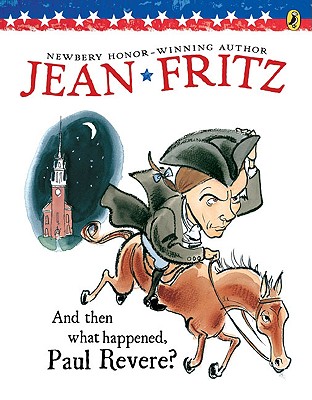 And Then What Happened Paul Revere?

With the recent election of another president of our two hundred plus year old republic, I thought it would be fun, after a recent trip to Boston, to revisit a book by Jean Fritz called And Then What Happened Paul Revere?

Wandering The Freedom Trail in Boston a few weeks ago, I came in contact with a number of buildings, celebrating historically iconic figures such as that famous lantern carrier, Paul Revere. A problem seems to occur when we tend to put these men into descriptive boxes featuring famous sound bites such as “One if by land and two if by sea.” as if that were the sum total of Paul Revere’s contribution to the fight for independence. And Jean Fritz is the perfect person to fill in the all-important blanks in their lives and fill in the funny, human parts of a personality.

Following the presidential election, I think it’s important for young readers to have another look at the books of Newbery Honor-winning author, Jean Fritz. Her biographies of historical figures are interesting and engaging for kids as they lend a very human portrait, warts and all, to these people who had a ringside seat at the founding of our country. They weren’t perfect, but as in the case of Paul Revere, they were passionate about their beliefs surrounding the formation of a new nation, sort of like today’s group of political figures.

Paul Revere had a lot of irons in the fire that included varied directions in his lifetime. And kids will be asking, as the book does, as each adventure for Paul unfolds, “And then what happened?”

Father to sixteen children no less, this was a dad who had to make money at a variety of trades. He made silver spoons, buckles, cups and engraved portraits, designed picture frames and even tried his hand at the dental trade, fashioning false teeth out of hippopotamus tusks!

Jean Fritz gives a very human face to Paul Revere. For instance, living his life with so many things to do at one time we read that while building a barn in haste, he put part of it on his neighbor’s property! Paul was definitely a multi-tasker by today’s standards.

As the English/Colonial confrontation starts to build, with taxes England imposed on newspapers, diplomas marriage licenses (it was eventually withdrawn), coupled with an additional tax on tea, glass, printers’ colors and paper (also withdrawn, save the one on tea), it incited the colonists to action.

With Paul Revere as one of its leaders, they formed the Sons of Liberty, a secret group formed to taunt the British. One of their escapades was a famous protest famously called the Boston Tea Party where Paul and company poured 10,000 pounds of tea into Boston Harbor. He was then selected to ride to Philly and New York to spread the news. He covered 63 miles a day and was back home in eleven days. And for that time period, it was long before he was expected!

No wonder he became Massachusetts Number One express rider AND A SECRET AGENT! His Big Ride was about to happen as it was generally agreed on by the colonists that the English would begin a march into the countryside to begin a war. His job, as laid out by Dr. Joseph Warren, director of Patriot activities, was to inform both John Hancock and John Adams what was afoot. Trouble was, his route, across the Charles River took him on a shorter route, yet one which was the same used by the BRITISH. Paul had preplanned a quick method of warning the people of Charlestown across the river. Two lanterns hung in the North Church if the British came by water, and one if they were coming by land. Boats for moving troops were spied on the Charles River. Two lanterns it was. He was in such haste to leave, he left the door to his home open and his dog got out!

But the best-laid plans can go awry. He forgot his spurs for the Big Ride and the cloth to be used to keep the oars quiet in the water, as he began a row to the other side of the river, had been left at home. Never fear kids, a lady nearby tosses her petticoat out the window to be used to wrap the oars for quiet and Paul’s dog who just happened to be with Paul, took a note home to his wife for the spurs, which were sent back, tied to the dog’s neck! Talk about ingenuity! What a daring doggie courier!

After the war, he set up a hardware store, a foundry that made stoves, anvils and even church bells. 75 of his bells still remain ringing in steeples of churches in New England.

In 1810, Paul Revere was 75 as he related stories to his nineteen grandchildren of his role in the fight for liberty. Stories he related were told to a rapt audience of small descendants that were followed by cries of  “And then what happened?” It tells us not much has changed, as children ask the same questions of our personal family histories today, so be sure to write yours down. These are some of the lessons of history.

In the meantime, if you want your children to have an amusing and historically accurate window into the founding of our country, Ms. Fritz’s young readers historical biographies are a great place to start.

*An ALA Notable Book

A Library of Congress Book for Children