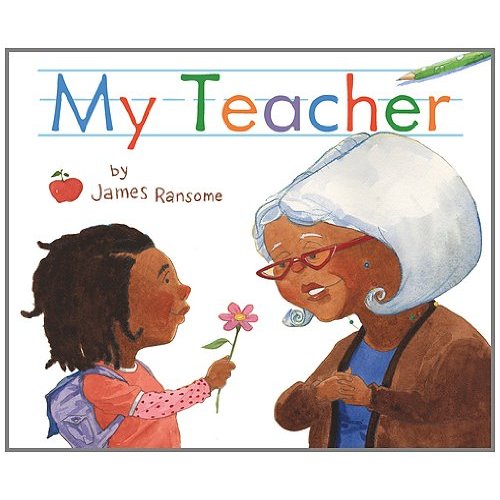 Celebrate Teacher Appreciation Week the First Week in May!

Teachers who have taught for extensive periods of time and thus have seen multiple generations of children, have my greatest respect. It can be a tough job at times, a thankless one at others, but if done with the wholehearted love and commitment of either the neophyte or the seasoned veteran, as here in Mr. Ransome’s book, it indeed, as the saying goes, “can effect eternity”. The ripple effect of one or several great teachers in a child’s life is incalculable. I’ve had two such gems in my own life; one in grammar school and one in high school. They were the people I wanted to be like, the ones who made me want to strive, give the extra measure and who made learning both interesting and hard work. And as another saying goes, “anyone who says different is selling something.” These two individuals emulated each day some intangible enthusiasm that I wanted to soak up like a sponge and be part of and ultimately I did, as a teacher. In My Teacher, Mr. Ransome agrees that great teachers are gifts given on a daily basis to those children lucky enough to come into their sphere of influence. Most kids have built in “authenticity barometers” that send the needle way off the scale when they encounter a teacher who exhibits the real thing and is not just going through the motions. In My Teacher the needle jumps!

Mr. Ransome, named by the Children’s Book Council as one of the 75 authors and illustrators everyone should know, won the Coretta Scott King Award for his book, Creation. And his latest, My Teacher, is truly a picture book worthy of getting to know.

Not only may your children catch familiar glimpses of their own teachers in its pages, but also I’m willing to bet parents may remember fondly in her similar teaching styles, attitudes and affirming aspects of the special teachers they remember in their lives. And it provides valuable parent/child conversation openings for attitudes on learning in general and  teachers in particular.

Teachers, as Mr. Ransome so beautifully puts it are the dispensers of gifts on a daily basis. And here in his book whether the teacher portrayed is encouraging story writing, introducing her class to jazz and the Lindy hop danced at the Savoy Ballroom, or sensitively allowing children to discuss the differences in family configurations in her class, she is intimately attuned to the fact that learning is more than the three Rs and the “teachable moments” must take precedence and be grasped in their immediacy.

My favorite part of the book is the relating of past stories of her now grown former students. One who was quite messy with wrinkled shirts and holes in his pants became a city councilman, as she says quietly, “Who could have imagined he’d be working at City Hall?” Another girl who complained of being sick every day with a variety of ailments from headaches to tummy aches and mysterious rashes, is now called Dr. Williams by the teacher!  The confidence-building teacher can make everything seem possible, arming her students with knowledge buoyed by their own dreams.

It sort of reminded me of a movie called Mr. Holland’s Opus starring Richard Dreyfuss some years back. Mr. Holland is a music teacher who comes in contact with a variety of students with a passion for music, but each struggles for a way to master a particular instrument. He comes up against one frustrating roadblock after another in their instruction, but never relents. He finds a way to reach and teach each one.

The final scene is his last day before retirement in an auditorium filled with his now grown former students playing the opus he has labored over for many years with his most challenging student and oboe player, now governor of the state, sitting proudly in her seat in the woodwinds! They are his opus!

Mr. Ransome’s simple, yet quietly eloquent book is an affirmation to both parents and children that one can never judge a book by its cover until it’s read front to back. The reading of My Teacher dispenses an assurance and positivity of the power of one person to impart life lessons and knowledge with each turn of its warmly illustrated pages of the ever-changing opportunities for growth presented by life in the classroom, taken into the wider world for a lifetime.