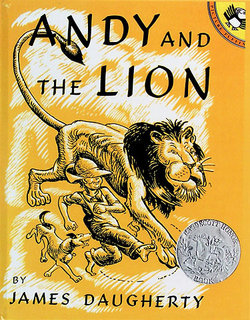 Andy And The Lion

Even the King of Beasts, the noble lion, can have a “thorny” issue to deal with in his paw. And in James Daugherty’s, “Andy and the Lion” a 1938 Caldecott Honor book, the themes of kindness and bravery rewarded by gratitude, all in a country setting of a simple orange and black coloration, are timeless. Perhaps Daugherty’s tale has echoes of Aesop’s ancient fable, George Bernard Shaw’s 1912 play, “Androcles and the Lion,” as well as the 1952 film of the same name starring Alan Young of TV’s “Mr. Ed” fame.

Andy, our young hero, bravely confronting the King of Beasts in his hour of need by removing a thorn from his paw, sees his kindness rewarded in a seemingly chaotic circus scene where a lion dashes from the center ring sending panic among the onlookers. But guess who the lion turns out to be? Yup, the one with the thorny problem.

Children can easily relate to this fresh retelling of the earliest of Aesop’s fables. The reader will beam with pride to see Andy, the hero of the day, rewarded for his empathy to the King of Beasts as he is pinned with a medal for bravery by the major at city hall post-circus melee. And hey! The earliest pages of the book describe Andy as a reader, taking books out of the library about lions, reading through supper all evening and just before bedtime. The final scene is perfect, for it shows Andy taking the lion book back to the library accompanied by the King of Beasts. Even lions like the library! Librarians take note.