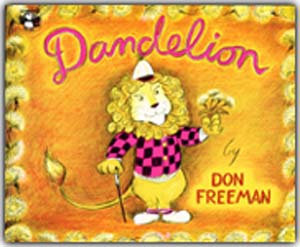 I’m sure we’ve all found ourselves in the position of receiving an invite to a simple party and planning to relax and attend as ourselves with little hoop-de-doo involved. Well, that’s what Dandelion the lion, invite in hand, in fancy gold ink no less, “plans” on doing as he receives a tea- and-taffy party invite from Jennifer Giraffe.

Things start to spiral out of control quickly for Dandelion as he begins his prep for the party with a simple haircut onto a manicure, a wave and curl, fancy sport jacket with added hat and cane to top it all off. Did I say simple preparation? The final touch is a bouquet of dandelions for his hostess. What he doesn’t bargain for is the fact that his hostess, with pearls draped on her lovely long neck, fails to recognize this dandy of a lion, slamming the door in his face. Wouldn’t you know it, the skies darken, gusts of wind spring up and Dandelion’s beautiful bouquet, hat and hairdo are blown to the four winds as he is left standing under a weeping willow tree. To say that he looks bedraggled in both style and spirit is putting it mildly. But as the sun peeps out following the rain, with curls undone, wet jacket hung on tree limb, Dandelion in his original form, emerges.

He slowly disengages from check jacket, cane and his other un-Dandelion like accessories and spies, as he sits on Jennifer’s stoop, three dandelion flowers beneath the step. With a resolute, “I think I’ll try again”, he bravely rings the bell and finds himself welcomed heartily by all of his friends. Jennifer, in turn, relates the story of a silly looking lion that previously appeared at the door and the whole group laughs along with the incognito Dandelion.

Don Freeman, author of “Corduroy”, “Norman the Doorman”, an ALA notable book, and many others has perfectly captured the common desire of all of us to ‘gild the lily’, as it were, when as Dandelion so succinctly states at the end for us all, “ From now on, I’ll always be just plain me.”

So, kids, take a lesson from a lion called Dandelion and just be you and believe that that is enough, not just for lions but also for everyone.