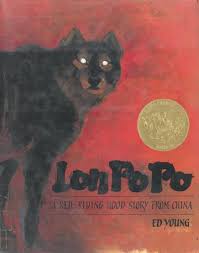 February 24th just happens to be the birth date of one of the two Grimm brothers, Wilhelm, the youngest of the two brothers. Jacob and Wilhelm have regaled generations of children with their tales, some pretty grim, but then fairy tales seem to allow children to face and overcome unspoken fears in the safety of the reader’s arms. From the first edition of stories published in 1812 holding some 86 stories, there were seven editions of their stories in all, with a total of 211 stories in the seventh edition.

I’m sure that some will be very familiar to readers, such as The Elves and the Shoemaker, Little Red Cap (otherwise know as Little Red-Riding Hood), Hansel and Gretel and Rumpelstiltskin. Others less well known, would include Mother Hulda (please find and read this one), King Thrushbeard, The Seven Ravens,and The Wedding of Mrs. Fox.

In addition to being the birthday of Wilhelm Grimm, this is also the Chinese New Year,  which begins on February 16  and ends on March 2. So, it seemed appropriate on the birthday of Wilhem Grimm and during the celebration of the Chinese New Year, to dovetail this Chinese version of Wilhelm’s Little Red Cap with a Chinese take on one of his best known tales about never underestimating the power of a young girl…or, in this case…three!

This 1989 Caldecott Award winning Chinese version of the tale of Little Red Riding Hood comes from an ancient oral tradition that may be over a thousand years old.

The story of the small girl eluding a “big bad wolf” crosses cultural lines with this red-hooded and cape-cloaked gamine in either the Charles Perrault’s French take or the German Grimm Brothers version of the simple red cap look of a young woman walking though the woods to a sick grandmother to deliver food.

Here, Ed Young who grew up in Shanghai, brings his Eastern sensibilities to his own translation and telling of his unique take on this familiar fairy tale. His art style employs a type of Chinese panel art perfectly complimented by the watercolor pastels that provide a perfect framing of the story.

Living in the countryside of northern China with a mother who has gone to visit granny, three daughters named Shang, Tao and Paotze must combine both brains and brawn to outwit a clever wolf posing as the faraway granny come to visit them!

Alerted by the odd low voice, thorny hands, bushy feet, and hairy face of this wolf in granny’s clothing, they devise a battle plan. Trust me, this is a wolf who is both slow on the uptake and outmatched by three Red Riding Hoods who were not born yesterday. Hint: a rope and hoisted basket are crucial in his defeat and demise!

Interest in fairy tales is evidently growing in the popular culture with the increased following of such series as Once Upon a Time where fairy tale characters awaken from an evil curse in modern times. Each is prodded to remember who they truly are by a small boy that just happens to be the grandson of Snow White. Alas for the evil witch, now the town mayor and his adopted mother, the boy is in possession of a book with each fairy tale character’s true story which, when read, will jog their memories. Plot twists abound and it’s fun to see how the fairy tale characters interact with one another and in flashbacks their pasts intertwine with future selves. Even a movie version of Red Riding Hood by the director of the famous Twilight series, updates this timeless tale.