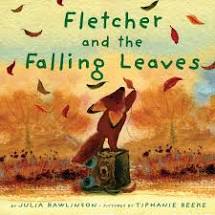 “Fletcher and the Falling Leaves” by Julia Rawlinson; illustrated by Tiphanie Beeke – Here is a Young Fox in Fine Fettle….Except for the Changing of the Seasons!

I’ve discovered a picture book fox named Fletcher; and so should your young readers.

And by the way, have you noticed an uptick in foxes on mugs, clothing, books and company symbols?

Foxes have come a long way since Bre’r Fox days. They are in the public consciousness.

The name also resonated with me immediately, as our well-loved childhood and nattily dressed in vest and cutaway jacketed rabbit, was also called Fletcher.

He now sits in elegance and composure with my husband’s boyhood panda, named Egg in a small rocker. Sad to say, Fletcher has survived the aging beautifully; Egg, named for the white of a panda’s fur….well, not so much. Egg is a combo of, how may I put this gently, DARK gray and black!

Back to Fletcher the fox, folks. He is innocence and childhood itself… in fur.

Julia Rawlinson has created an enduring character and the softness of Tiphanie Beeke’s art has made him endearing and relatable to young readers in that you can just about feel his fur!

As he watches the change of seasons revealed in the falling of the leaves from his favorite tree, he is alarmed. Despite his mother’s assurances that:

The fall winds blow the swirling leaves from the tree as Fletcher tries to reapply same and then, in frustration, tucks the leaves into the tree’s crevices.

Fletcher is worried as he sees, in turn, squirrels and porcupines appropriating the fallen leaves for winter nests:

“Leaves! Wonderful! Just what I need

for my nest, ” said a squirrel.

“Don’t take them away”

“The tree doesn’t need them anymore,” said the squirrel,

“Help! Help! The wind and the squirrel are stealing

In this starred review, listen to two critics take on this picture book:

“This potent synthesis of art and prose conveys a child’s first awareness of the changing seasons with reverence and wonder.

“A poetic tribute to winter and fall, Fletcher’s story is sure to resonate with young readers.”

I was thinking of O. Henry’s 1907 short story called “The Last Leaf.”  It, too, displays the same kind of love and selflessness, though perhaps in a much more adult and self-sacrificing way.

Here, Fletcher, undeterred by the inevitable loss of the leaves from his tree, makes a bed for the last leaf, right next to his own bed in his cozy fox den, out of love and concern.

But my favorite part of this book is what he finds as he awakens:

The tree was hung with a thousand icicles, shining silver in the

early light. “You are more beautiful than ever,” whispered Fletcher

“But are you all right.”

A tiny breeze shivered the branches, making a sound like laughter,

and in the light of the rising sun, the sparkling branches nodded.

The tree is okay and so is Fletcher, and so will your young reader be as they read the other adventures of this sweet, young fox in:

“Fletcher and the Springtime Blossoms”

“Fletcher and the Snowflake Christmas”

Hope they make a stuffed Fletcher as an add on to this picture book.

He would be a great partner and third friend to our original Fletcher and Egg!