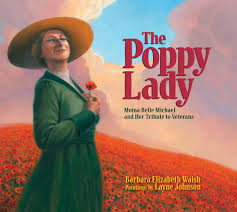 In Britain, On the Sunday Before November 11th, There is Remembrance Day; In the United States it is Veterans Day. Both Remember Service and Sacrifice. The Poppy is the Flower to Remind Us Never to Forget.

“The Poppy Lady: Moina Belle Michael and Her Tribute to Veterans”

Perhaps you’ve heard of Remembrance Day in Britain. It is to remember that that on November 11th on the eleventh month, on the eleventh day and at the eleventh hour, the guns of World War l ceased. It was optimistically called “The Wat to End All Wars.”

There is a war memorial In Whitehall, London, called the Cenotaph. People gather at the site wearing poppies for two minutes of silence to remember the sacrifices and losses borne in that conflict. It is usually held on the Sunday before November 11th.

It has been said that the two minute silence is an opportunity for time to stand still as humanity looks back and remembers, but also looks forward with hope. Wreaths of poppies are laid at the base of the granite Cenotaph, where originally a peace rally had been held following the war. The Royal Family, politicians and regular folk gather and remember the loss.

Almost one hundred years ago, a woman named Moina Belle Michael, via a small red poppy, did just that. And the legacy of her commitment echoes down the years to 2019.

Ms. Michael had a motto that she relied on since her youth, and I believe it is a motto worth sharing with young readers today. Her motto said:

“Whatsoever your hands find to do, do it with all your might.”

Fine words for a new generation that is struggling in some sense to find its way true north. Heck, even we parents are still muddling through at times. For aren’t we all on a learning curve together?

We shall not sleep though poppies grow

Turning over the poem, on an envelope, she wrote on its flap this pledge:

Working with primary sources, experts and the great-nieces of Ms. Michael, Ms. Walsh uncovered the story of this remarkable woman of dogged determination.

Referencing the poppy as the Miracle Flower, the picture book author also interviewed veterans and their families, and members of The American Legion and The Veterans of Foreign Wars.

His paintings depict such events as the sinking of the British ship, the RMS Lusitania, in March 1917 with 128 American lives lost, setting the U.S. entry into WWI in motion. In April of the same year, Lt. Col. John McCrae, knelt amid crosses set in a flood of red poppies in Flanders Fields, and the artist juxtaposes this scene, with another of Ms. Michael “poppy hunting” in novelty shops in New York for artificial poppies to represent the real ones in Flanders Fields. It’s clearly done with respect and reverence for this woman on a memory mission. His subject is realized with both humanity and honor – and beauty. Well done!

This Veterans Day, November 11th, originally called Armistice Day, please let your young reader discover the legacy of the woman named Moina Belle Michael that took a poppy, and made it a yearly paper preserved patriotic symbol, both to veterans of foreign wars, and to all lives lost in the “fog of war.”

And it is the poppy that, instead of lulling us into forgetfulness and sleep, as it does Dorothy, in “The Wizard of Oz”, in Ms. Michael’s picture book, it serves as a reminder of what and who should be remembered, as classic children’s books still are – with love!