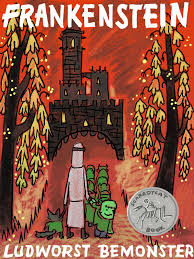 This Halloween 2012 parody by author Rick Walton and artist Nathan Hale, who according to the book jacket: “got bored one Halloween and decided that their favorite children’s book would be much, much better if there were monsters in it.”

And what was their favorite classic children’s picture book? Why the famous “Madeline” of Ludwig Bemelmans, of course.

Now you might think that it’s a huge stretch of the imagination to parody the story of a French boarding school attended by, of course Madeline, and those neat and tidy girls pictured in “two straight lines” into a monster mash of a classic.

And the trick here is to read Bemelmans’ “Madeline,” FIRST, to your young reader, and THEN, at this time of the year, bring in the howling fun of “Frankenstein : A Monstrous Parody” by the two parodists known as Ludworst Bemonster!

They will shriek not from fear, but from laughter, at this devilish retake on Bemelmans, Miss Clavel, his prim boarding school head, and her Bemonster opposite, known as Miss Devel!

Here are the opening lines from the parody:

In a creepy old castle

All covered with spines,

In two crooked lines, they bonked their heads,

pulled out their teeth,

and wet their beds.

Here are the opening lines from the original:

In an old house

in Paris that was covered with vines

They broke their bread

And brushed their teeth and went to bed.

In some comments on “Goodreads,” there was one gentleman who felt the book was good enough to be used even in a high school class to define “Parody.” Great idea!

Nathan Hale ( hope he’s not the Revolutionary spy come back from the dead with the famous quote…”I only regret I have but one life to give for my country.”) has spot on art reminiscent of the feel of  Bemelmans’ “Madeline,” done here with oranges and browns to delightful and devilish Halloween effect.

Miss Devel, formerly the original Miss Clavell, is here with her famous quote of ESP that starts the adventure:

“Something is not right.”

And off the parody romps with one of the twelve dearies a stand out from the rest:

“The ugliest one was Frankenstein.”

I have to say he’s the cutest Frankenstein I’ve ever seen, and reminded me vaguely of a Charles Schulz “Charlie Brown” with his sweet innocence…..gone wrong!

Have a Halloween delight with your young reader as you have a chance to share BOTH with them.

“Madeline,” in 1940″, won a coveted “Caldecott Honor Book designation for children’s picture books, plus in 1954, The Caldecott Medal itself for Best Children’s Picture Book of the Year for “Madeline’s Rescue”, BUT in 2012, “Frankenstein: A Monstrous Parody” proudly displays a  front cover silver seal, stamped with the words….A CaldeNOT Horror Book.