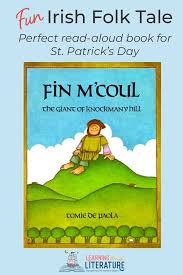 Happy St. Patrick’s Day And What Better Day Than Today to Meet “Fin M’Coul: The Giant of Knockmany Hill” By Tomie dePaola

Bet you never thought that giants bully OTHER giants.

Well, one does. And, if you pick up a picture book that is perfect reading for St. Patrick’s Day, you will meet one called Cucullin…he of the brass finger on his hand, wherein lies his strength.

Picture book author, Tomie dePaola, has depicted many picture book tales that reflect his Italian heritage, including the famed Caldecott Honor book called “Strega Nona,” along with her many iterations.

In 1981 he also allowed his Irish ancestry to shine forth as well in “Fin M’Coul:The Giant of Knockmany Hill.”

My kids were young ones at the time, and they loved Fin, his wife, darlin’ Oona; but the feared and fearsome giant, Cucullin, not so much.

Cucullin is a giant bully of the first order, not only because of his size, but because of his fabled strength, quartered, ’tis said, in his famous right hand brass finger.

Every giant in Ireland

had been given a good beating by Cucullin

Every giant, that is,

And Cucullin swore by the green

That he would never rest,

day or night, winter or summer,

Oona, Fin’s wife soothes his fear with a healthy slab of Irish soda bread, and a huge mug of stout, good wife that she is.

But, she’s also not in favor of his running away.

For, you see, this smart Irish lass has a plan that involves brains, not brawn…and a charm.

Oona then worked a charm

the fairies had taught her.

and braided them into three braids.

She put one around her right arm,

one encircling her heart,

and the third around her right ankle.

Now, nothing she did could fail.

All I can say is that her plan involves bread, a frying pan, wet cheese, and white stones.

Oh, and Fin dressed up in a bonnet and baby clothes, sitting in a cradle is part of the plan, for you see, he doesn’t high tail it, as per Oona’s instruction.

And, suddenly, in bursts Cucullin to the cozy Irish cottage.

And what happens to the bully Cucullin is as fitting an Irish tale for St. Patrick’s Day as you’re likely to find anywhere.

The tale of Fin M’Coul has been handed down from one generation to the next.

He, they say, is best known for the Giant’s Causeway he built between Ireland and Scotland. There are many adventures of Fin M’Coul, but this is one of the funniest.

There are beautiful borders in this picture book that are lusciously colored renderings of the tale.

The borders Tomie used here were inspired by early Irish jewelry and metalwork. Their golden swirled and triangular shapes, mixed with corner  renderings of rabbits, elves, and shamrock bedecked horses, all complement the narrative, and the deep green hills of Ireland shown, perfectly set off the vivid colorations in Tomie’s trio of characters.

All I can say is, in closing, : “Fin, marrying that smart Irish lass named Oona was the very best decision that you ever made.”

Please have your young reader take a look at this grand picture book called “Fin M’Coul: The Giant of Knockmany Hill” by Tomie dePaola, to find out the reason why.