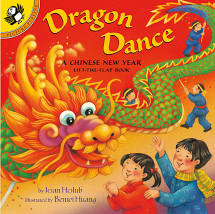 Hey, Eager Young Minds! 2020 is the Year of the Rat…. According to the Chinese Lunar Calendar!

For parents of 2-6 year olds who are looking for a colorful and comprehensive look at the ancient cultural traditions surrounding the Chinese New Year, binding family celebrations at the heart of the festival, here is a book that explains many of them for the younger group, using an appealing, hands on approach.

Kids will love to lift the flaps and discover.

In Dragon Dance, there’s lots for everyone to do in the preparation for the welcoming of the New Year whose date is determined by the Chinese lunar calendar and much to enjoy during the ensuing festive celebrations.

Whether it involves shopping for fresh flowers at an outdoor market, eating New Year dinner with the family, or receiving the much-awaited traditional red envelopes containing money from one’s parents, grandparents or close relatives, family is the focus of the fun.

I’ve also read that some children awaken to find, under their pillows, red envelopes the contents of which, may or may not reflect how good they’ve been during the previous year.

And naturally, the best of course is saved for last – watching the New Year parade.

For the smallest of celebrants, this may just be the perfect introduction to the Chinese New Year.

For those of you who are wondering why 2020 is the year of the Rat, look no further than the culture of today.

The Chinese New Year, or Spring Festival has more than 4,000 years of history behind it, and is the longest holiday of the year stretching from January 17th to February 8th, also called the Lantern Festival.

The rat is the first of all the zodiac animals which include, in addition to the rat, are the ox, tiger, rabbit, dragon, snake, horse, goat, monkey, rooster, dog, and pig.

The story goes that the rat is the first of all zodiac animals. One myth says that the Jade Emperor said their order would be decided by the order in which they arrived at his party. The Rat tricked the Ox into giving him a ride. Then, just as they arrived at the finish line, the rat jumped off and landed ahead of the Ox, becoming the first.

Various activities occur with each day of the festival. For instance, on January 27th, it is said, some will leave grains and crackers in corners to share their harvest with the rats. This way the rats will possibly not disturb them during the year.

Have to remember that.

Those born in the year of the Rat have this to be said for them:

Rats are clever, quick thinkers; successful, but content with living a quiet and peaceful life.

I, however, was born in the year of the Pig!

It is said that:

Pigs have a beautiful personality and are blessed with good fortune in life.

And to seal the observation literarily, witness what Charlotte, the Spider, wrote of Wilbur the Pig, on her web in E. B. White’s masterful tale of a friendship involving the two, called “Charlotte’ Web”:

Happy New Year!  Or, in a simple greeting, one may say (xin nian kuai le).