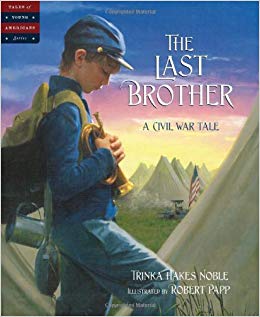 Observing the 155th Anniversary of the Battle of Gettysburg with “The Last Brother : A Civil War Tale” by Trinka Hakes Noble with Illustrations by Robert Papp

As we enter the July 4th celebrations of our fight for independence, there is an anniversary of another sort that young readers should perhaps learn more about.

It is also the 155th Anniversary of the bloodiest and fiercest battle of the Civil War between the states that sometimes pitted brother against brother in terms of loyalty towards either the Union or Confederate cause.

The battle took place for three days where some 50,000 soldiers perished on the battlefield in Gettysburg, Pennsylvania on July 1-3, 1863. Those are horrific numbers, but they are impersonal in large part to people today.

Trina Hakes Noble, in “The Last Brother: A Civil War Tale,” brings a face and familiarity to what loyalty and love look like in the character of young Gabe, a Union bugler. He has lost two other brothers in the war and accompanies his last brother, Davy, a Union “foot soldier” at Gettysburg.

War is never simple or clean. It is complicated and filled with a horror one can only imagine.

Young Gabe meets a bugler called Orlee from the Confederate side in the interim time before the battle begins, and a commonality and friendship is formed. Did you know that buglers had to know 60 different calls?

Robert Papp, its illustrator, renders paintings here, Booklist says, that are ” hauntingly detailed and place readers right in the action.” And, as Booklist also points out, “Readers won’t learn much about the war or the battle, but will get a sense of its sorrow and hardship.”

And, just maybe, for young picture book readers that, in itself, is a most important piece of information to take away from the Battle of Gettysburg.