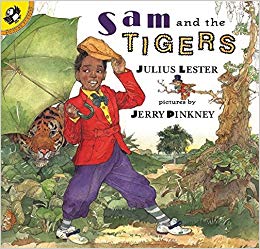 In The Wake of the PC Hammer Falling On the Laura Ingalls Wilder Award, Please Give Some Thought To This Past Review of Two Books. 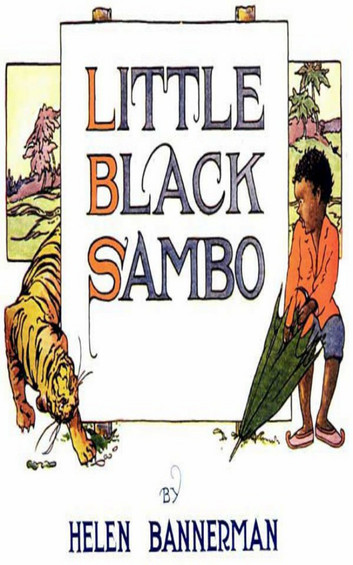 Little Black Sambo and Sam and the Tigers

Racial Sensitivity in the Picture Book

Perhaps some of you have read of the ALSC, the American Library Service to Children, a branch of the American Library Association, and its very recent decision to rename the Laura Ingalls Wilder Award, given not only to her in 1954, but to others in successive years, including author, Jerry Pinkney in 2016, for their contributions to children’s literature.

They have chosen to rename the award, named after Laura Ingalls Wilder in 1954, The Children’s Literature Legacy Award.

As I have said in a previous blog, I consider this decision by the ALSC, an immoderate decision; probably a politically correct one, but one that allows no historical perspective for Ms. Wilder’s The Little House on The Prairie series that were the autobiographical reminiscences of her childhood and growing up years traveling from Wisconsin to Kansas and Minnesota in the 1800’s; a very different time, place and cultural perspective from today.

But, does it make sense that it should be judged by standards of today?

Will insulating young readers from things that make them uncomfortable help them in their ability to persevere, press on and navigate life in the manner of  Laura and Mary Ingalls; two sisters in The Little House on the Prairie series?

If you read my previous blog on Ms. Wilder and the erasure of her name from the award, you may read for yourself some of the words used in her series in regard to Native-Americans and Afro-American.

Please judge for yourself and for your young reader whether it justified the decision by the ALSC. in regard to the renaming of her award.

I think it did not.

This is 2018, but there have been other instances where racially insensitive and stereotypical art or literature proved offensive and came under fire.

In 1899, Helen Bannerman wrote what some consider a classic picture book called The Story of Little Black Sambo and in 1996, author, Julius Lester, and illustrator, Jerry Pinkney, both African Americans, teamed up to write what is considered by many to be a less divisive and more racially sensitive take on the original. With a very fresh and modern approach in both art and narrative, their book called Sam and the Tigers ,is a retelling of Ms. Bannerman’s original.

But between the two versions is not merely the divide of a time lapse, but a cultural awakening to a stereotyping of black culture in art and language in the original that many would find offensive.

Mr. Lester points out in the notes at the back of Sam and the Tiger that the use of the name “Sambo” has had a racially negative connotation since the 17th century. Combined with this are Little Black Sambo’s illustrations having a seemingly exaggerated illustration of African facial features. Yet Mr. Lester NEVER hints that there was racist intent in Ms. Bannerman’s creation.

In fact, both Mr. Lester and Mr. Pinkney regarded Sambo as a hero when THEY read the book as children. It was HOW he was depicted that “took away his hero status”, says Mr. Lester.

And yet, in fairness, the art in some versions that I have seen of the book, but not all,  were very unflattering in their depiction of Sambo’s physiognomy. In addition, the name Sambo, itself, was considered insulting.

I invite you to read BOTH and make your own informed decision.

Like many of my readers, I grew up with the first and came to the second retelling as an adult. “Little Black Sambo” is, as one of its publishers put it, “a window on the past”, and when he read it to his young boys and asked what they thought, “they said they thought Sambo was a hero and marveled at his bravery.”

But in rereading one and reading the other, for the first time through the eyes of a person in the 21st century, the original AND the retelling could also be seen as a book on how to outwit BULLIES through smarts, as the use of one’s wits can and does outdo brute strength. Now that is a very timely topic for today!

The story, in both versions, is one of a young boy waylaid by tigers and commandeered out of his clothing, shoes and umbrella, yet ultimately triumphs to collect the tigers’ remains that dissolves into butter as the tigers battle over WHICH is the FINEST. The purloined clothing is discarded when they chase each other’s tails around a tree at warp speed and won’t let go of one another. The fine meal of pancakes perfectly topped with the tiger butter provides the satisfying ending.

I mentioned Sambo/Sam as hero and bully defeater a bit ago. A fine example of this is Sambo and Sam’s redirection of two of the tigers as they attempt to EAT him despite his proffering of clothing.  Each in turn says why would a TIGER have need of Sambo/Sam’s shoes OR umbrella?

The coy suggestion is made that the shoes may be just the ticket for an EAR ORNAMENT. And his TAIL, it is suggested, could use the young boy’s umbrella, as decorating the tiger. Sam, in Sam and the Tigers, also reminds the tiger that eating a boy could drive up his CHOLESTEROL!!

This is brilliant bully deflection, not to mention the critical thinking skills that BOTH young boys in these stories had at the ready!

For that is what these tigers are in a way; they are big, striped, bullies that strong-arm Sambo in the original, and Sam in the retelling, out of their  respective clothes, shoes, and umbrella.

Sambo is seen in the original as a South Indian child, while in Sam and the Tigers, he is an inhabitant of a mythical place called Sam-sam-sa-mara where EVERYBODY is called Sam and there is no divide because of labels. “What a wonderful world!” as Louis Armstrong put it in song!

Sam and the Tigers depicts Sam as very much his own person and quite assertive as he picks out the clothes he chooses to wear under his parent’s wary eye. Sam chooses his duds carefully and colorfully from a variety of sellers that possess hilarious names such as “Mr. Elephant’s Elegant Habiliments” and “The Feline’s Finest Finery.” Habiliments is definitely on the “let’s look it up” list. Further inquiry is always good in a picture book.

Jerry Lester lets his character in his retelling come through using the sounds and voice of “southern black storytelling” and it is this flavor that makes it a perfect read aloud.

Jerry Lester points out that many people avoided the original for fear of being termed racist, but on reflection, he says something that stuck with me.

“Yet what other story had I read at age seven and remembered for fifty years?” Great point! For in the end, it is the heroic and imaginative world that children enter into, created for Sambo/Sam by Helen Bannerman and Julius Lester and Jerry Pinkney, that will, like all classics, stand the test of time.

And, so too, will The Little House on The Prairie series by Laura Ingalls Wilder, despite the current inability of some to see their content in the cultural and historical perspective in which they were written.

Literature can have many teachable moments, and these books provide great examples of those moments for the young readers of these books and their parents.