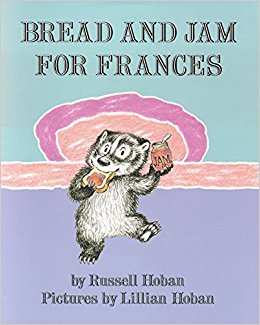 Bread and Jam for Frances by Russell and Lillian Hoban

If you’ve not stumbled on to the “Frances the Badger” series created by Russell and Lillian Hoban and enjoyed by readers for years, you are in for a real treat.

I chose “Bread and Jam for Frances” of the lot because, let’s face it parents, every family has at least one picky eater, or as my mom used to refer to it, being “finicky”. Fussy is also a term that I’ve heard used in connection with children who have, shall we say, an unusual penchant for a specific food.

Finicky was not a word not easily tolerated in my house. I can still hear my mother saying those famous words, “I am not running a restaurant!” Menus were planned, meals served, and the rest was definitely up to the individual –the eating part I mean. You could choose to eat what was served, if it was to your liking, or push it around the plate if it wasn’t. Case closed. No exceptions or substitutions.

Russell Hoban and his wife, Lillian, who provided the illustrations, made Frances a pretty human little badger. She is imaginative, at times stubborn, and can even get taken in as in “A Bargain for Frances.” Don’t miss this one, too!

In 2010, publishing celebrated the 50th Anniversary of Frances’ arrival with the initial book entitled “Bedtime for Frances.”

Children and parents took to this little badger who can stall with the best of them, and uses rhymes to express her inner feelings.

Frances, the endearing badger in this selection from the Hoban series, falls into this category with a thud.

She is not exactly a wheedler, but she does try to use persuasion and logic in her arguments for her favorite food – bread and jam. Lillian Hoban, who, as I said, contributed the illustrations, has imparted an endearing, yet sly humanity to Frances and a kind yet firm resolve in the faces of her patient parents who are more authoritative than authoritarian if you catch the difference.

I love Frances’ moms answer to her daughter’s logical entreaties to get her way food wise is with Mother Badger’s parental prodding, yet gently spoken, “I think it’s time for you to go outside and play now”. No confrontational assertions, just the parental prerogative of a strong suggestion, said in a kindly way.

Their solution to the tiny badger daily requests for bread and jam is simple – give her what she wants!

Her initial exuberance fades quickly as she sees the same thing served at each meal as the family digs into veal cutlets with string beans or spaghetti and meatballs.

Her plaintive query of “Aren’t you afraid my teeth will fall out?” as she stares down at the umpteenth sandwich, had me chuckling. This is exactly what a child might say. When all else fails, toss the ball back to parental responsibility and a bit of guilt thrown in. These parents are not biting. Her question is met with a look of sly and innocent surprise by her wise parents.

As a chastened Frances learns, there are all kinds of delicious foods to be sampled and savored, with some found more to her liking than others. Frances’ parents approach, I thought at the time, was inspired since most children tire easily of the same thing and, after all, variety is the spice of life!

Allowing Frances to have the exact thing she wishes to eat, and only that one thing makes for a fun, family read. Kids will certainly identify with Frances, and parents with her mother and father’s attempts to stay one step ahead of her new eating preference.

If you’ve not met this family of very human badgers, I highly recommend you give them a try. This badger mom and dad could write a book on parenting, if so inclined.