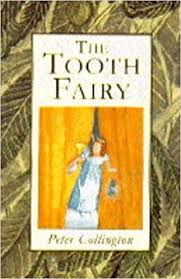 If you have never heard of Peter Collington, welcome to his wonderful world of the “wordless picture book.”

Several years back, I was first introduced to his picture book called “A Small Miracle,” originally published in 1997. Booksellers had voted it “The book they most hated to see go out of print.” And oddly enough, it didn’t, thank goodness.

In ninety-six wordless paintings, Peter Collington’s tale of kindness rewarded is the miracle of a nativity set in a church that is vandalized, set right by a kind and elderly woman, and then comes to life to save her.

It will wordlessly enrapt both you and your young reader.

On National Tooth Fairy Day, let’s celebrate together another Peter Collington favorite called, what else, “The Tooth Fairy,” published in 1995.

In preparation for my blog I was reading comments on the book from “Goodreads,” and one teacher named Naomi, applauded it for what she termed “visual literacy” and its allowing early readers who struggle with reading to foster the ability to tell the story and learn plot comprehension verbally.

She also said” “If a classroom has a projector and screen, the book could be shared this way. However, because a reader forms the story within her or her own head without text, it may take different amount of time for each student to view a page.”

In a storyboard format, Peter Collington unfolds his own take on the magic machinations of the tooth fairy.

As a young girl loses a tooth, as in generations past, she carefully puts the tooth under her pillow at night and her mom opens the bedroom window.

Here, Collington allows us to see the Tooth Fairy at work, as she goes along a tunnel to her silver mine to fashion the perfect coin that is to be placed under the young girl’s pillow in exchange for the lost tooth.

But, what happens to the recovered tooth?

Ah! All I can tell you is that it involves the Tooth Fairy’s piano, a key that is broken….and fixed at the denouement, where she sits playing a tune.

On the final page is a tooth box and a coin for the reader to cut out and assemble.

Please allow your child the wonders of Peter Collington’s wordless picture books beautifully realized in paintings that allows their imaginations to develop and visual literacy to begin.

Here are a list of some of his others:

“The Angel and the Soldier Boy”