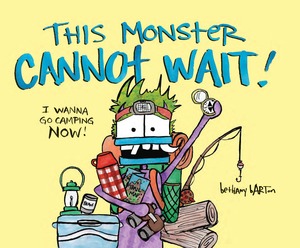 The Noblest of Virtues: PATIENCE!

Have you followed Ms. Barton’s previous book in which her adventurous monster, like most small boys, was not jumping up and down about a haircut? Things get pretty gruesome until a truce is negotiated and the hair-raising foray is “snipped” in the bud! Well, young readers and patient parents, he’s at it again – the monster that is. And here, the area of learning curve for this monster is PATIENCE. Ah, that most noble of virtues is not at present in the lexicon of this young, green haired urchin.

Summer is over so parents and young readers’ may cast back to fond memories of vacation family forays and the multitude of QUESTIONS that began each trip. Most of those questions are consumed with the WAITING issue; something that is a developable skill in most young ones and for others there is a loooong learning curve.

Enter Stewart. His family is embarking on a camping trip – but not for five days. I don’t know about you, but when I was young, five days could seem like five years! Stewart is a very inventive little fellow and like most kids can try to “make things happen” when they aren’t happening fast enough to suit him. His methods make sense – to Stewart. He goes about the house pushing time forward literally on all the clocks in the house and crossing days off the calendar ahead of their dates. My favorite is his take on H.G. Wells version of ‘The Time Machine” where the protagonist actually dabbles in pushing time forward! Stewart’s version is a cardboard box with a coat hanger for lift. His mission is a failure.

Stewart’s “aha” moment, in his bid to hurry time, comes via his own attempts to comfort his best friend at school named Feliz who is consumed with missing her friends over summer vacation. Stewart chimes in that in her distress over missing her friends, she is also missing the NOW!

Stewart quickly resolves to use the remaining five days to prepare for his camping adventure and what better use of time than reading such titles as “A Monster’s Guide to Camping” and “What to Scare When Camping.”

Young readers will be reminiscing over their own camping and vacation experiences and the fact that it WAS worth the wait. For as the saying goes, the past is HISTORY, the future is MYSTERY and the now is a gift. That’s why they call it the PRESENT! Way to go Stewart, enjoy the NOW!