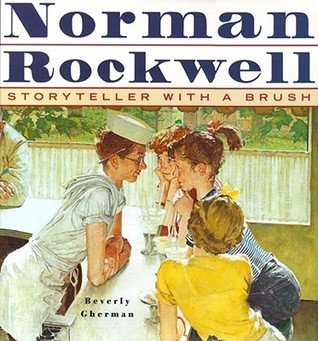 Norman Rockwell; Storyteller With a Brush by Beverly Gherman

Perhaps Norman Rockwell is a rather strange choice to highlight Memorial Day for young readers. But maybe not.

Is there any artist/illustrator that captured the American spirit and way of life in his time better than Rockwell?

Memorial Day is a day of honoring those who served their country in the military and are no longer with us. And it’s a day for stories of those people to share with young people today. For as long as they are told in narrative and art, those who served, continue to live in our mind’s eye..and in that of our children, most importantly. For children LOVE stories.

And who could paint a story to be told better than Norman Rockwell! Not many.

Beverly Gherman’s Norman Rockwell: Storyteller With a Brush is a great picture book for young readers.

The biographic arc of Norman Rockwell’s life is there, but more importantly the man who captured “Average people doing average things” is the place where he steals our hearts.

His first front row seat on America and his uncanny ability to capture it, came as a cover artist. By way of The Saturday Evening Post, his first cover appeared on May 20, 1916. It was called Salutation and portrays a Sunday best dressed young man pushing his baby sister in a carriage, while being unmercifully taunted by two baseball uniformed lads who tip hats and preen in mock deference to him.

Rockwell captures the juxtaposition of the three boys perfectly. The one is both miffed and determined at his job of baby carriage pusher. He is galled at being called out this way by his contemporaries, but presses onward, while the taunters cannot, being boys, help but let this opportunity to harass go unexpressed. It’s perfect!

Rockwell was forty seven when WWII broke out. Too old to serve, he ventured to tell the story of the average young man who he named “Willie Gillis.” And here’s a plug for reading to your children at night. One particular evening Mary, his wife, had been reading the Mother Goose rhyme of “Wee Willie Winkie, that night-gowned tapper at night time windows reminding all that kids should be in bed! And inspiration struck!

In a later cover, Rockwell painted the faces of SIX generations of the fictional Gillis family from the Revolutionary War to the debut of Willie Gillis in uniform in WWII.

Chapter Seven in Ms. Gharman’s book is my favorite. It’s called “Average People Doing Average Things.” And better than anything other phrase, I think it encapsulates the beauty, power and ability of Rockwell’s art to capture the universal in the everyday.

In 1942, President Roosevelt gave a famous speech explaining how the free world was at war to preserve and protect every individual’s right to Four Freedoms:

It was an important speech, but how, said Rockwell, can you picture those high ideals to the average man and woman?

Ben Hibbs, the then Saturday Evening Post editor, said to Rockwell to just concentrate on the Four Freedoms.

And so, probably four of his most iconic artistic works were born.

Freedom of Speech: A man standing at a town hall meeting with all ears and eyes turned intently to what he has to say…and his right to say it. And in the lower left corner, barely seen is Rockwell’s own EAR listening to the speaker!

Freedom of Worship: Rockwell thought of the quote, “Each according to the dictates of his own conscience.” The piece depicts a “montage of heads and hands praying.”

One woman is holding a rosary;  a man wearing a yarmulke, or skullcap on his head holds a small Bible…it gives a powerful sense of respect for the differences in our society.

Freedom from Want: This is one that perhaps many young readers could identify with, as they see a family gathered about a large rectangular table with members seated up each side, eyes fixed on the grandmother and grandfather at the head of the table of a Thanksgiving dinner. Some of the faces even look out as if towards the viewer. It signals the opposite of want, which is bounty.

Here is a peaceful scene of two parents tucking the young ones in at night. All seems serene…except in the father’s open hand is held a newspaper, with barely readable headlines that would quicken the pulse of any parent; WOMEN AND CHILDREN SLAUGHTERED BY RAIDS.

Perhaps this Memorial Day, as we remember and retell stories to our young children of why we celebrate this day that for many may only mean a long weekend and the start of the summer season, please do tell your young readers a bit about Norman Rockwell, The Four Freedoms…and most especially, the men and women in our military that have so nobly served and died to make those Four Freedoms a reality in their young lives.