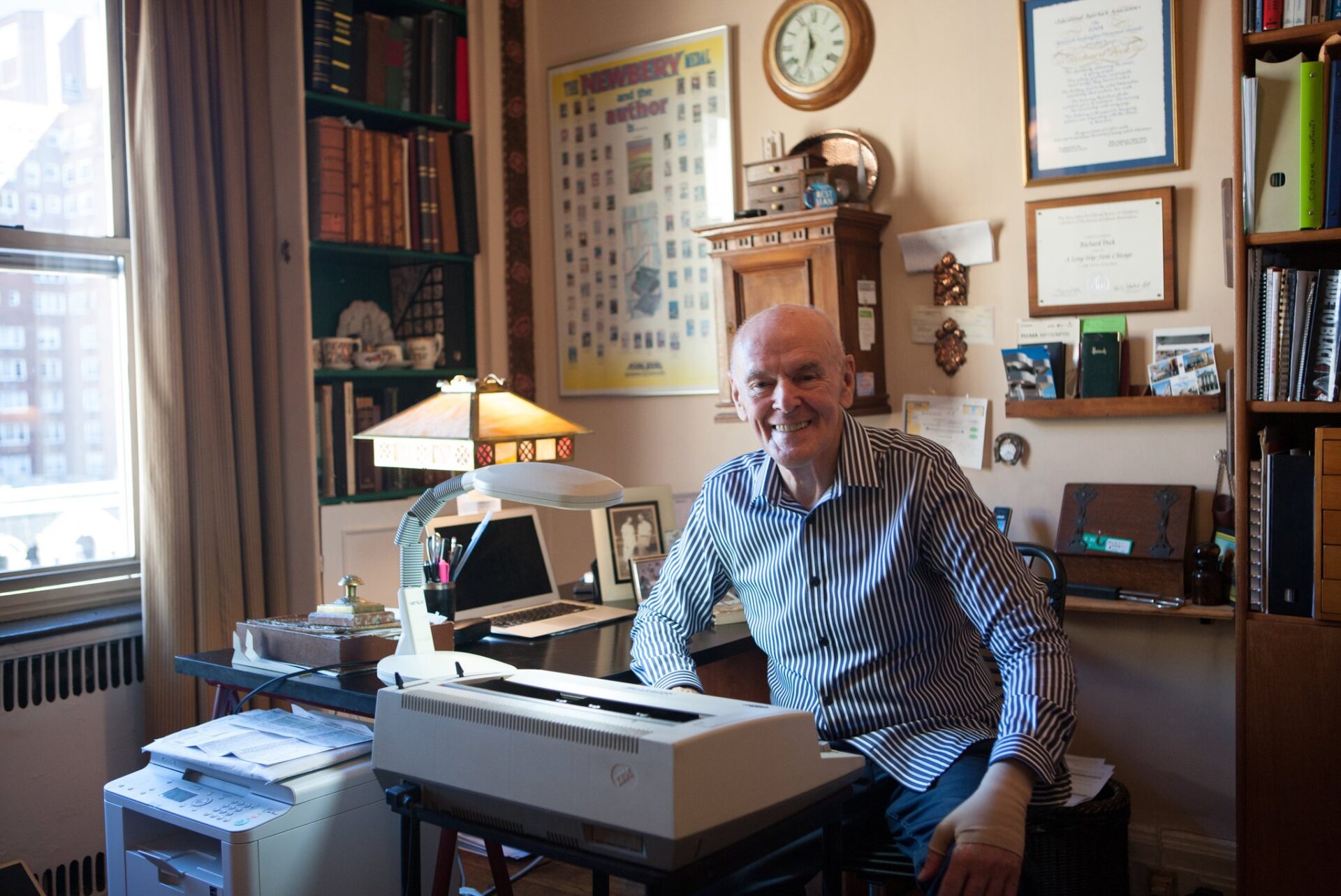 If You Do Nothing Else This Summer, Please Introduce Your Young Readers To Grandma Dowdel…..and Richard Peck!

Richard Peck, children’s author extraordinaire, whose books possess a pure and keen insight into the human heart, and whose characters are filled with a purposeful and practical wisdom born of living life on their own terms, recently passed away.

It is sad, but the sadness is compounded if your young readers have never had the chance to read his books. They are gems. They are peopled with persons you wish you could meet, and maybe have in some odd way, in the thrum and hum of life.

He wrote fiction and mystery for young adults that is unique and classic.

Here are a list of but some of his notable awards:

1977 – Edgar Allan Poe Award: Best Juvenile for Are you in the House Alone?

1990 – Margaret A. Edwards Award for “significant and lasting contributions to Young Adult literature.

Richard Peck, Decatur Illinois native, graduate of Depauw University and a masters degree from Southern Illinois University, called on those mid West values in his validation of what was truly important and lasting in life. He filled many of his books with characters that modeled them.

My absolute favorite is the redoubtable Grandma Dowdel from his trilogy of A Long Way from Chicago, A Year Down Yonder and A Season of Gifts.

She is at alternate times daunting, indomitable, formidable, commanding, no-nonsense and awe-inspiring… but most of all, loving. Grandma Dowdel prepares young ones for what they will face in life by facing it herself in a calm and measured way. She’s a hoot and capable of doing things unexpectedly off the grid. Grandma Dowdel is Mary Poppins down on the farm.

A summer spent with this senior is a page taken from the syllabus of life and it’s worth every day with her, for her lessons will last long past the fall of autumn leaves. They will sustain young ones for a lifetime.

In A Year Down Yonder, sixteen year-old Mary Alice is sent off from Chicago, along with the beloved Bootsie, the cat. From post-Depression 1937 era Chicago, and her home there, her parents decide to send her to southern Illinois until times get better. Mary Alice has to settle in for a spell with a relative that lives there; and that would be her Grandma Dowdel.

Settle in, Mary Alice. It’s gonna be a bumpy, but beautiful ride!

Things come full bore immediately on arrival as Mary Alice meets a contemporary named Mildred Burdick, who attempts to extort $1 from Mary Alice. Mary Alice is immediately marked by the cagey Mildred as a rich type from Chicago.

How Grandma Dowdel out maneuvers Mildred thereby instructing Mary Alice, sets the stage for many of the lessons to follow. How’s this for a piece of encouragement from Grandma Dowdel:

I can’t fight all your battles for you, but I can give you a level start.

Richard Peck initially taught high school English and then was switched to middle school, and as you can hear from his quote he echoes the thought of Anna from the musical The King and I who says in her song,  “Getting to Know You” that:

But a true and honest thought

That if you become a teacher

By your pupils you’ll be taught.

And Richard Peck was. He taught and he LISTENED:

Ironically, it was my students who taught me to be a writer, though I was hired to teach them. They taught me that a novel must entertain before it can be anything else. I learned there is no such thing as ‘grade level reading’; a young person’s ‘reading level’ and attention span will rise and fall according to his degree of interest.

The last sentence of Richard Peck’s quote speaks volumes to me and it should to the parents of young readers and teachers.

When children’s interest level rises, their seemingly dictated reading grade level also somehow rises to the challenge, and it is in that continuing challenge to the quality of WHAT they are reading, that will spur them on to be better readers.

And so, I urge you to introduce your young readers this year, and soon, to  Grandma Dowdel via Richard Peck, and the rich legacy of the love of literature that he has left to help the the coming generations of children to grow and thrive on the feasts of fiction he created.

His legacy is lengthy and loving!