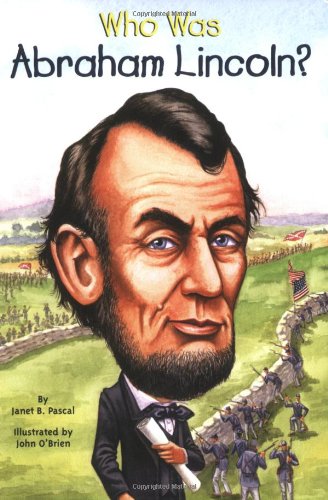 Who Was Abraham Lincoln?

“Honest Abe,” “The Great Emancipator”, “The Rail-Splitter” or any number of other nicknames are among those given to this 16th president of the United States. They are all part of his amazing story in “Who Was Abraham Lincoln?”, just one volume in the “Who Was…? series. I recommend this series highly if you want your young reader to have more than a thumb nail sketch of Abraham Lincoln.

February 12th was the birthday of this giant in the annals of history that came from poverty, had a year of schooling, was a self taught lawyer, member of Congress from Springfield, Illinois, debating whiz, and President during the wrenching Civil War that divided a country, and sometimes pitted brother against brother.

In eleven chapters, your child AND you will meet this 6’4” man born in Hodgenville, Kentucky that preserved a union and is enshrined in history books, our hearts and his behemoth memorial in Washington, D.C.

Most presidents are achievers, pretty complicated and Lincoln is no exception here. In this illustrated biography, you will read about the man and some facts you may not know that reveal his lighter side. Did you know he was a practical joker? I didn’t. I love the intimate portrait painted of this very human historical giant that suffered from depression.

The book ends with “The Gettysburg Address” (had to memorize that in school – talk about pithy and profound) and a Timeline of events in Lincoln’s life. Additionally, this book gives a side by side Timeline of what was happening in the world at the same time. Did you know that Charles Darwin and Edgar Allan Poe were born in the same year as Lincoln?

With the emergence of Presidents Day, we have begun a tradition of honoring all Presidents on a single day. And so, giants like Abraham Lincoln no longer seem to have the day to themselves. They should, and “Who Was Abraham Lincoln?” and February 12th perfectly combine to do just that for your young reader!

Hey, having trouble getting your boy to read? The “Who Was…?” series introduces people like the famous Lincoln, but also men like Elvis, Harry Houdini, Babe Ruth and Dr. Seuss to them. Great jumpstart series for boys too!

Celebrate National Arbor Day on April 29, 2022 with a Charming Young Girl Named Maple and a Tree All Her Own That Requires Her Love and Nurturing; Just Like All Trees Do!