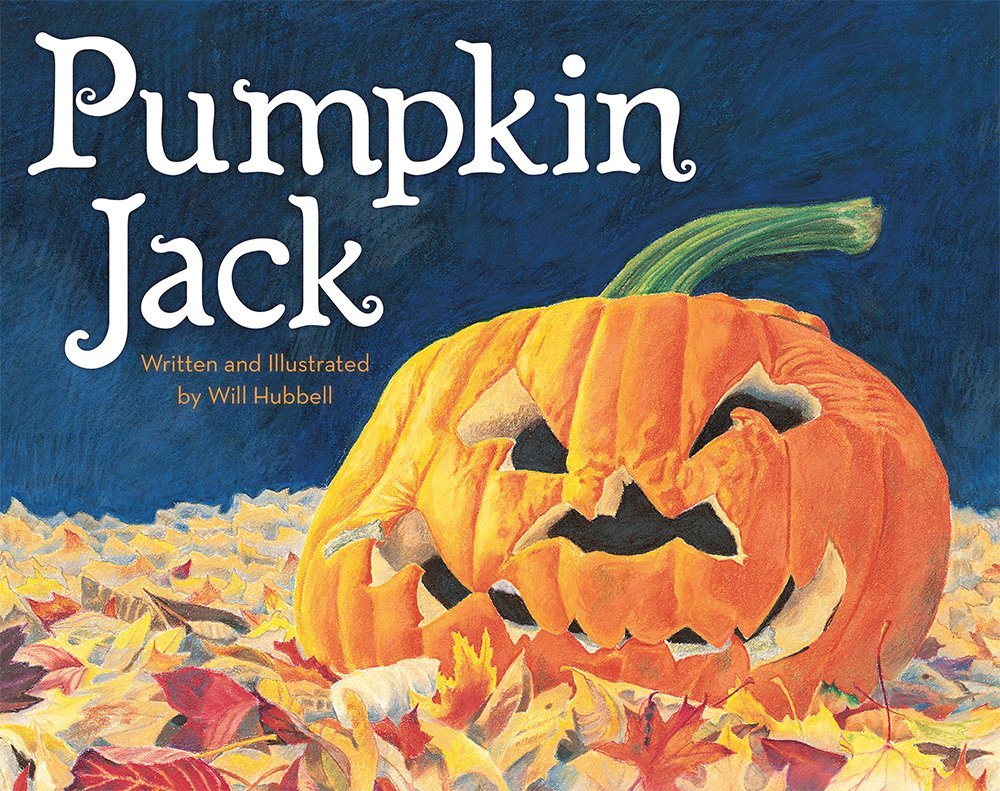 “Pumpkin Jack” – Written and Illustrated by Will Hubbell

Here’s a heartening read aloud for young ones that have carefully picked a pumpkin in a field or selected one in a grocery store, carved it into a jack o’ lantern, only to see its smile sag and disappear with time, and its remains disappear into the great compost heap that is the garbage can.

But wait! There is hope and renewal afoot for young Tim, the young first time  pumpkin carver and his “fierce and funny,” jack o’ lantern, he gives the appellation of…JACK!

Readers can hear the crinkle of old leaves, smell the earthy

odors of the garden, and breathe in the crisp air of the first

frosty day autumn. Any child who has to throw away a beloved

Most young readers have been in the same situation as young Tim who labors over his jack o’ lantern, sees its smiling face dance on his wall, post trick or treat night next to his bag of goodies… and sadly, days later, hears the dismal words from his mom:

“This pumpkin is starting to rot. It’s time to throw it out.”

Dead summer plants fill their garden and Tim carries the grinning Jack to the garden filled with autumn leaves. As the days pass, Tim, through play or chores, comes to the garden and sees Jack’s fierce grin change from fierce and funny to “silly”

As autumn moves into winter, the snow covers Jack.

There wasn’t much left – just a faded and crumpled pumpkin

skin, a stem, and a few seeds. Jack’s Halloween magic was a

the last bits of his pumpkin.

What a downer, right? But no, my young readers! Though change is an inevitable part of life, and yes, the seasons do mimic and foretell it, they also promise. along with it, hope and renewal, through nature.

And that, as spring arrives, is exactly what young Tim experiences with the formerly crumpled Jack.

where Jack had been. Tim found it and guessed what it was.

Waiting and watering the sprout, Tim sees the clusters of yellow pumpkin flowers reach toward the sun. They aren’t pumpkins yet, but there is promise; and with patience, as the small green orbs appear, Tim whoops with delight.

The frosts of autumn inevitable change the pumpkin leaves to a “pale blue grass” as they fade and die.

It’s easier now to seek and find the unripe pumpkins that he marches to his porch for further ripening.

Halloween approaches and generous Tim gives away to his friends all but one pumpkin.

Will Hubbell has provided a great read aloud for the many young ones that have experienced initially what Tim has, with his pumpkin named Jack.

There is a general feeling of sadness at the outset of the acceptance of the change that occurs with the loss of Jack.

BUT, there is also a wonderful lesson for young readers in the persistence and patience of Tim as he nurtures and tends new growth.

What is exciting about this read aloud is that it provides not just new growth in a pumpkin seed…but also the wonderful maturing and growth in a young boy.

And that is what a great picture book can do. It can both entertain AND teach.

“Pumpkin Jack”, published initially in 2000, does BOTH in fine fall fashion! This is a must read for this or any Halloween!