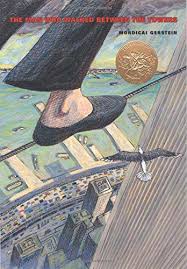 “The Man Who Walked Between the Towers” by Mordicai Gerstein

Instead of ruminating on September 11, 2001, on this 19th anniversary of an unimaginable day, filled with both horror and heroics, I am instead shining a light on the Twin Towers on a day in 1974.

It was a day when a Frenchman who was an artist of the high-wire named Philippe Petit also did the unimaginable at the Twin Towers.

Instead of death and destruction, he captured the imaginations of people who marveled at his bold and daring escapade.

In 1971, he had performed a high-wire walk between the towers of the magnificent Notre Dame Cathedral in Paris.

Then, on August 7, 1974, Philippe Petit put a tightrope between the Twin Towers in New York City, some quarter of a mile up in the sky. And for about an hour, he performed high wire tricks, dancing and walking for the people that were entranced and agog.

Mordicai Gerstein’s picture book narrative and artistic depiction of this feat, captures in word and painting, won the Caldecott Medal in 2004 as well as the 2004 Boston Globe – Horn Book Award for Picture Books.

The picture book also won the Carnegie Medal for Excellence in Children’s Videos in 2006.

Yes, September 1, 2001 and the 19 span of years in between that day linked by deeds of both infamy and incredible valor are forever etched in our minds and memories.

But, if you have a moment for a picture book that reminds us also what feats of beauty also can live in a child’s mind within a picture book, then “The Man Who Walked Between the Towers” by Mordicai Gerstein might evoke an amazing memory of the Twin Towers from 1974.