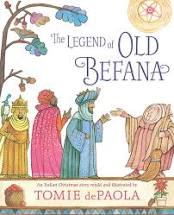 “The Legend of Old Befana; An Italian Christmas Story” and “The Story of the Three Wise Kings”; both retold and illustrated by Tomie dePaola

January 6th is in the offing, and to some observers of Christmastide, it marks the feast of the Epiphany.

It’s the day that, according to Christianity, the Three Wise Men from the east, ended their journey in Bethlehem, presenting gifts to a newborn baby whose star had led them there.

Tomie dePaola, one of the most popular children’s book authors and illustrators  and winner of the prestigious Laura Ingalls Wilder Award, now known as the Children’s Literature Legacy Award, denoting his body of work’s contribution to children’s literature that included a Caldecott Medal, Newbery Award, Regina Medal , Smithson Award to name but four, also wrote two stories featuring the tale of the Three Kings. The first is his delightful telling of an Italian legend surrounding the Feast of the Three Kings:

Every year, on the Feast of the Three Kings, January the sixth, Old Befana visits all the children of Italy and leaves them candies, cookies, and gifts. It is said that she is searching for the Christ Child.

There are many stories about Old Befana and how she began her search.

This is one of them.

My now-grown children loved this story, first published in 1980, and it still holds children in thrall. The story of the grouchy Old Befana who is forever sweeping and baking and then meets, by chance, the entourage of the Three Kings traveling to Bethlehem is enchanting. They tell her of the impending birth of this Babe of Bethlehem and urge her to accompany them. Talk about amazing chances and choices in life!

Does Old Befana go with them?

Or, must she first bake some sweets for the newborn, and of course, sweep up the house before following the three Kings?  For those readers familiar with the conundrum of Mary and Martha moments from the Gospels, this just might be another optimum moment of chance versus choice.

Will the delay allow her to catch up?

It is truly a night of miracles, as Tomie dePaola weaves this ancient Italian legend of Old Befana:

Every year on the Feast of the Three Kings, January the sixth, Old Befana runs across the sky.

She visits all children while they sleep and leaves them gifts from her basket.

Then she takes her broom and sweeps the room all clean.

“For, after all,” says Old Befana, I never know which child might be the Baby King of Bethlehem.”

Please allow your young reader to revel in this legend of Old Befana and her night of miracles.

It might just be another reminder to “seize the day.”

In our world today, most especially children, need to believe that miracles are still possible.

The second Tomie tale celebrating the arrival of the Three Men in Bethlehem is called “The Story of the Three Kings.” They follow the star in the heavens that augurs the birth of a great king to present gifts to the newborn king.

The Epiphany, through the arrival of the Three Wise Men, is a symbol of the manifestation of Christ’s birth to the rest of the larger world; a world that longs, prays and hopes for peace and justice.

Here is but one review of the book:

DePaola details the Nativity story of the Three Wise Kings in this gorgeous book first published in 1983, with gorgeous acrylic paintings glowing with blues, greens and pinks.

Tomie dePaola, who passed March 30, 2020, has left a living legacy and a sort of epiphany or manifestation of what he considered important, relatable and translatable to picture book readers. In making something so awe-inspiring as Melchior’s, Caspar’s and Balthasar’s journey in following their inner guidance system in knowing that something profound lay at the end of their journey, he invites young picture book readers to share in that profundity in his very accessible art and narrative.

Please allow your young reader to experience the Feast of the Epiphany through these two Tomie treasures.

It’s almost the Epiphany, Tomie….but then you knew that.